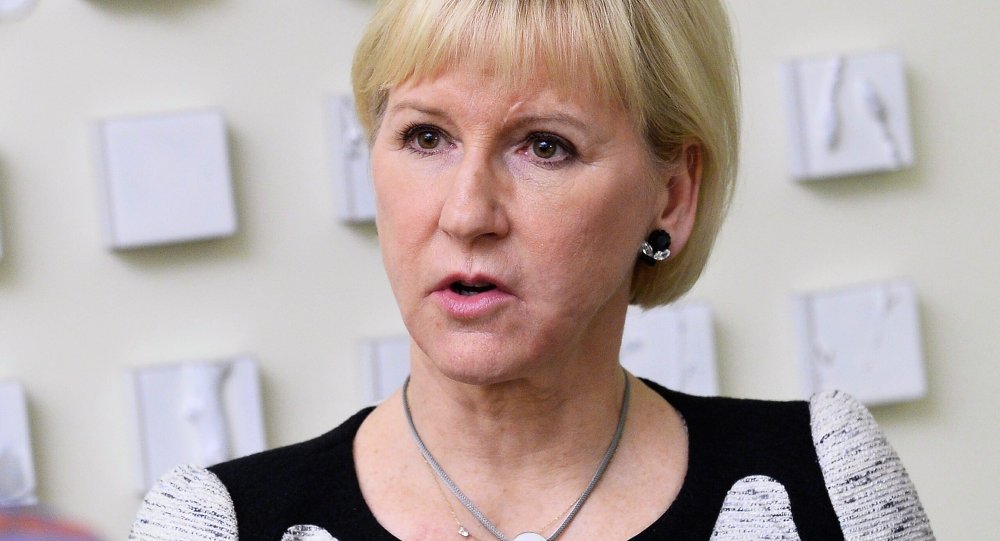 Margot Wallstrom told reporters in Luxembourg that the Finnish government, which is opposed to EU refugee quotas, needs to remember that thousands of Finnish children were given refuge in Sweden during the Second World War.

© Photo : forsvarsmakten.se
Crying Wolf: Soldier Fabricated Sweden's First ISIL Knife Attack
Swedish Foreign Minister Margot Wallstrom told reporters in Luxembourg prior to an EU meeting on the refugee crisis that Finland needs to remember its own history when making decisions on the matter, and offer to resettle more of the refugees who have reached the European Union.

"You should remember your own history," was Wallstrom's message to her eastern neighbors.

During World War Two, Finland fought two wars with the Soviet Union; Sweden, which maintained neutrality during the war, gave refuge to thousands of Finnish children.

"We then took in more than 70,000 war children from Finland for safety," said Wallstrom on Friday.

Wallstrom's Finnish counterpart, Timo Soini, is leader of the Finns Party, the second most popular party in Finland, which holds an anti-immigration stance. The party formed a coalition government with the Center Party and the National Coalition Party after winning the second largest number of seats in April's parliamentary elections.

© AFP 2019 / EMMANUEL DUNAND
‘No EU Without Britain’: Finland Gives UK’s Reform Bid a Boost
Despite the mounting refugee crisis in Europe, the new Finnish government announced in June that it had reduced its annual quota of refugees in 2016 to 750, the same number of people the country has taken each year since 2001, apart from an increase to 1,050 applications accepted in 2014, and set to be accepted in 2015, due to the Syrian crisis.

In August the Finnish interior ministry announced that it expected to receive up 15,000 asylum applications this year, four times higher than in 2014.

While Finland's Prime Minister Juha Sipila, of the Center Party, called on Saturday for a "show of compassion" amid the refugee crisis, and even promised to open his home in Oulu to asylum seekers, Soini has spoken out against plans from the European Commission to impose quotas on the number of refugees that EU member states must accept.

Soini, Wallstrom, and other EU foreign ministers met to discuss the issue at the EU meeting, which was held on Friday and Saturday in Luxembourg.

Wallstrom, a member of the Swedish Social Democrats, remarked on Friday that the current refugee crisis puts the credibility of the EU at stake, and that Finland is not the only country she feels is not shouldering its share of the burden.

"Both we and Germany will point out that we take a disproportionately large responsibility and unfortunately there are other countries doing very little," said Wallstrom, before the meeting.

Sweden in 2014 accepted more than 33,000 asylum applications, or 3,424 asylum seekers for every one million people in Sweden, far more per capita than any other European country. Germany, which granted asylum to 48,000 refugees, was next with 589 asylum seekers per one million Germans.