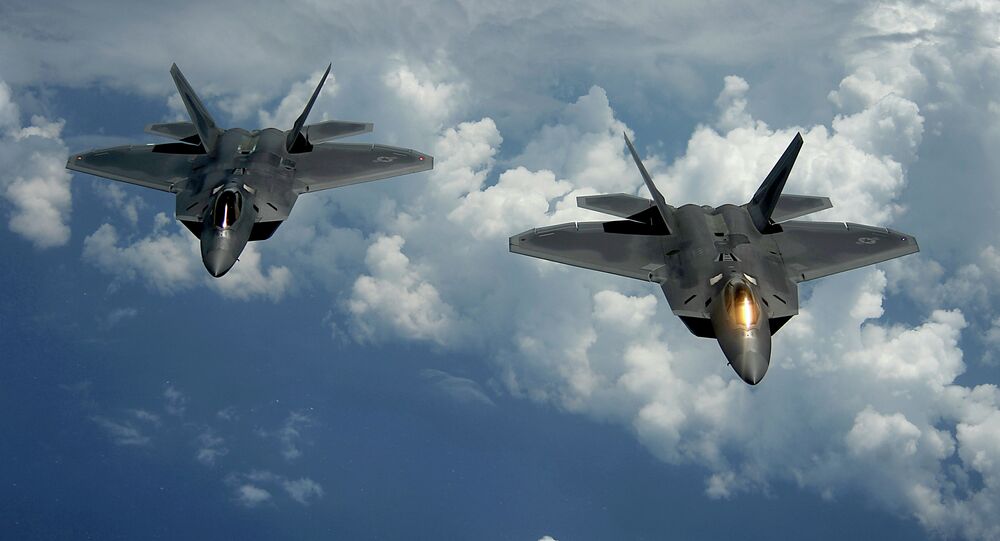 Lithuanian media burst into a fit of jealousy and indignation Friday after the Pentagon decided to send a pair of F-22 fighter aircraft to a base in Estonia instead of choosing a base in Lithuania. The media was adamant that the Americans chose Estonia due to the amenities offered in and around the base, including better hotels and entertainment.

© Flickr / US Pacific Command
Two Advanced US Air Force Fighter Jets Land in Estonia - Defense Forces
On Friday, two USAF F-22 Raptors, a pair of A-10 Thunderbolt ground attack aircraft, and a Boeing KC-135 tanker aircraft arrived for a brief forward deployment at the Amari airbase in northwest Estonia. And although media reports later confirmed that the planes had returned to their base in Spangdahlem, Germany later the same day, the short 'deployment' was taken as an insult by Lithuanian media.

As Delfi explained, the nub of the matter was that "such modern fighters have not yet visited the Baltic countries."

The online newspaper then proceeded to complain that "the fact that the Americans chose Amari, and not [Lithuania's] Zokniai aerodrome, is no accident. According to unofficial reports, pilots from many countries, including the US, Spain and Germany, prefer Amari, and not Zokniai. While Zokniai is located close to the city, it is more reminiscent of a Soviet base."

The newspaper explained that "pilots also do not like the hotels and entertainment which are available in Siauliai," a city in northern Lithuania not far from the Zokniai base. "Therefore," the paper noted, "persuading them to deploy in Lithuania, instead of Estonia, will be more difficult. The Estonians attract [NATO] military personnel not only by its base's proximity to the capital, but also through the amenities which are available on the base, which were upgraded last year."

Delfi jealously noted that while "Amari is located in the woods a few dozen kilometers from [the Estonian capital of] Tallinn, it offers its guests the very best of Tallinn's hotels, with transport and excursions provided for. Golf courses provide American military personnel with special discounts, and last year the menu at the base's canteen was changed to account for the taste of its foreign contingent."

© REUTERS / Master Sgt. Kevin J. Gruenwald
US Provokes Russia by Deploying F-22 Jets in Europe - French Military Analyst
Readers commenting on the article were divided in their assessment of the US military's decision. While some shared Delfi's indignation, others seemed grateful that the Americans chose Estonia, with one user asking his fellow readers to "imagine how on earth these people would be ready to die for you, if they can't even come to your country if the best hotels, clubs, prostitutes and discounts for golf are not provided for."
...
Reddit
Google+
Blogger
Pinterest
StumbleUpon
Telegram
WhatsApp
235