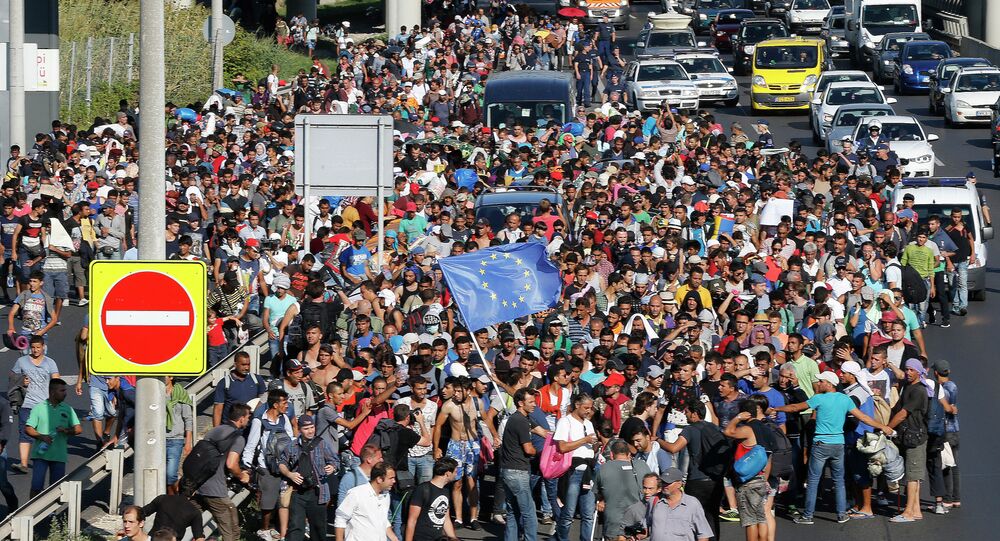 Former diplomat Sandor Csikos lays the blame for the flow of refugees through Hungary at the door of greedy corporations and US foreign policy, for making life unbearable for millions of people.

© REUTERS / Bernadett Szabo
Some 300 Migrants Escape From Refugee Camp in Hungary
The thousands of refugees who have traveled to Hungary this year are doing so because of a 'crisis of capitalism' that has made millions of lives in the Middle East unbearable, a result of the actions of greedy multinational corporations and US foreign policy, former Hungarian diplomat Sandor Csikos said on Friday.

Csikos explained the problems his country faces in dealing with the number of people seeking refuge in Hungary, or passing through to find it in other countries of the EU:

"The country [Hungary, with a population of 9.3 million] is second only to Italy in terms of the amount of illegal migrants who have arrived. This year more than 150,000 migrants have come already, and in August alone more than 57,000."

"When Hungary, for example, has had enough of waiting in vain for some kind of joint action and begins construction of a fence on its southern border, they immediately start shouting about intolerance," Csikos said, responding to criticism leveled at Hungary for building a wall along its border with Serbia, which he said is itself struggling to cope with the number of refugees and migrants within its borders.

"After the areas around bus stations in transit towns turned into gypsy camps, the authorities in Belgrade kindly decided to transport the migrants to the town of Kanjiza, not far from the Hungarian border. And when life there became unbearable, recently special bus journeys have transported our guests right to the border. As a result of which, if a couple of months ago an already record number of around 700-900 migrants crossed the border [daily], now 1,500 a day has become normal."

© AFP 2021 / CSABA SEGESVARI
A migrant man creeps under the metal fence near the village of Roszke, at the Hungarian-Serbian border on August 26, 2015
The countries of the EU are no more willing than Hungary's southern neighbor to bear the burden of the refugees and migrants, says Csikos, complaining that Hungary has received less than its fair share of EU funds to deal with the number of people who have traveled to the country, and in fact received a sum of money even less than that given to Poland, and far less than Greece.

Furthermore, Csikos complained that EU officials "don't have even an elementary understanding of what a refugee is, and what an economic migrant is," and explained to Svobodnaya Pressa the difficulties for authorities in making the distinction.

"In the case of some countries, for example Tunisia, or sub-Saharan Africa it is clear enough, what kind of 'refugees' there are; after all, there isn't a war going on there."

"But in the case of a great number of countries, it's really not easy to establish whether they are coming because their lives are in danger, if they are really just looking for work, or because they simply want to study at one of the western universities."

© REUTERS / Heinz-Peter Bader
Migrants board a train to Germany at the Austrian train station of Nickelsdorf, September 5, 2015
The blame for the number of people leaving their own countries, whether as refugees or as migrants, Csikos says, in any case lays with the governments of those same Western countries whose leaders he complains refuse to resolve the issue.

"To be honest, I don't know how all this finishes; the genie has been let out of the bottle," he admits.

"There are, of course, two reasons. The first – the syndrome of capitalism in crisis, when life for millions of people becomes unbearable; abject poverty, hopelessness, and more concretely, having nothing to live for."

© AP Photo / Lehtikuva/Heikki Saukkomaa
Russia Was Right About How to Deal with Syrian Crisis – Finnish President
"The second – of course, is the aggressive politics of the US, that politics of 'controlled chaos.' The insatiable greed of corporations. The insane desire of the US to dominate the whole world, destroying at all costs anyone and anything, who stands in their way."

"All these endless wars, conspiracies with the aim of removing displeasing regimes, like Gaddafi and Assad. Until recently prosperous, flourishing countries like Libya and Syria have now been turned into ruins."

"Pay attention to the silence coming from the US on solving this problem, though there is a precedent," remarks Csikos, who believes that the US should play a bigger role in solving the crisis wrought by its politics.

Pointing to the example of President Franklin Roosevelt, who in 1938 called the Evian Conference in order to respond to the plight of Jewish refugees fleeing from central Europe, Csikos asks why a similar measure is not undertaken by the US administration today to ease the burden on countries such as Hungary, who are bearing the most refugees.

"The problem of Jewish refugees was also a European problem – and then the US got involved. Why aren't they doing the same now?" asks Csikos.

Hungary to Send Buses to Shuttle Refugees to Austrian Border