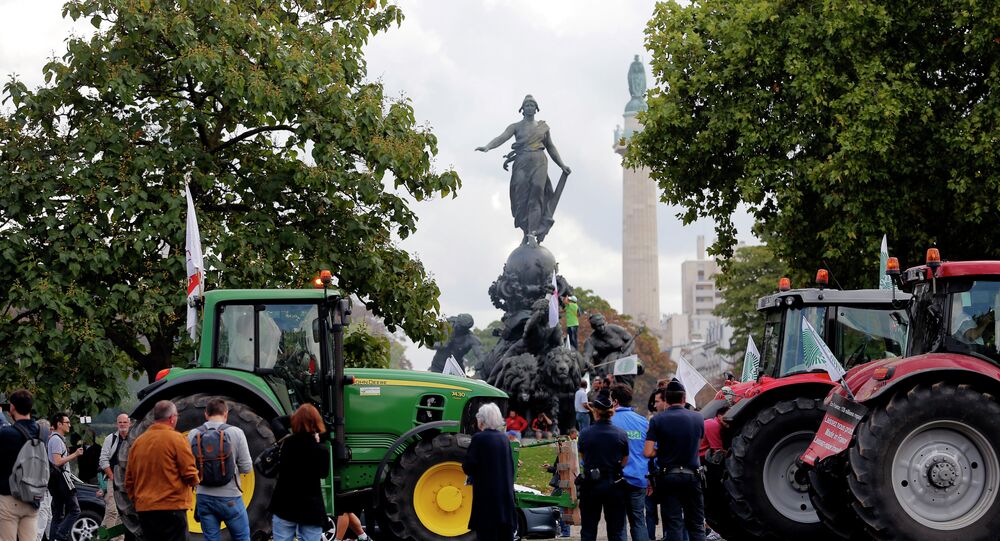 French farmers, hard-hit by the effects of the restrictive measures the European Union imposed against Russia, are calling for a lifting of the sanctions regime, a French lawmaker told Sputnik on Friday.

© REUTERS / Charles Platiau
France’s Aid Package for Farmers to Reach $3.3 Bln Over 3 Years
MOSCOW (Sputnik), Svetlana Alexandrova – In the latest show of frustration with falling prices and rising costs, French farmers drove over 1,500 tractors through the streets of Paris on Thursday. French Prime Minister Manuel Valls later pledged $3.3 billion in the next three years to support the agricultural sector.

Dhuicq, a member of the Union for a Popular Movement and representing the northeast Aube region in parliament, underscored that other EU member states had to "pay Poland not to be invaded by their product."

"As you see, sanctions against Russia are hitting some important sectors of the French domestic agriculture," he explained.

Over half of Poland’s apple exports used to be sold to Russia until Moscow issued a food embargo on foodstuffs from the European Union last year. The measure was adopted in response to sanctions slapped on Russia by the European Union, the United States and other Western nations for what they termed Moscow’s "annexation" of Crimea and involvement in the Ukrainian conflict.

Russia continues to vehemently deny playing any role in the war between Ukrainian government forces and independence supporters, while maintaining that the population of Crimea voted by an overwhelming majority to rejoin Russia in a referendum.

"To protect our farms, France is simply paying our taxpayers’ money. It is stupid," Dhuicq said.

In addition to advocating for the end of the anti-Russia sanctions, the lawmaker told Sputnik that French farmers had also called on the government to ease environmental standards and regulations.

An extraordinary EU Agriculture Council meeting to address the ongoing crisis in the dairy and livestock sectors is scheduled to take place in Brussels on Monday.

Some 5,000 Farmers to Protest Low Dairy Prices in Brussels on September 7