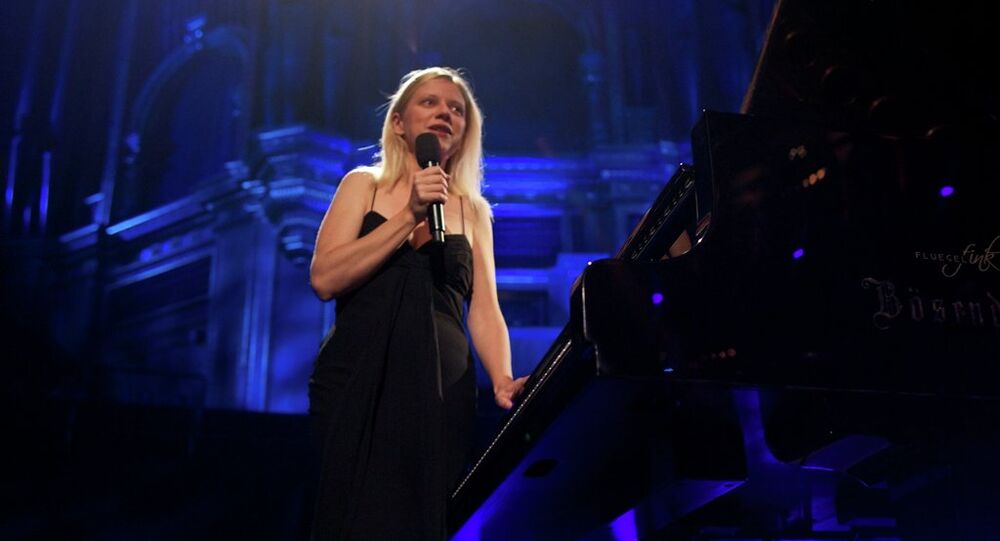 The Ukrainian-born classical pianist told Sputnik she might sue KLM airline for alleging that she "showed sympathy for the downing of MH17" and removing her soundtracks from the airline's in-flight entertainment playlist.

The Dutch airline said it was reacting to a complaint on Facebook by a Canadian-Ukrainian using the pseudonym Inna Thorn. More complaints followed: all anonymous, none substantiated by evidence.

As a result, "I received a lot of hate/death threats coming from ordinary Dutch people after the newspapers published the accusations" — Lisitsa told Sputnik.

Undaunted, she sent every one of her accusers her actual tweets about MH17: "I got all but one to apologize and offer the support. I was stunned."

"Pause here. Utter a prayer. Feel the minutes running by. Here fell Boeing, in a flash of despair, taking innocents lives away."

This was a placard written in Cyrillic next to the MH17 crash site, which The Guardian Moscow correspondent, Shaun Walker, tweeted on July 27, 2014. Lisitsa simply translated the text into English, so that everybody could read its poignant message.

And in the immediate aftermath of the MH17 tragedy, Lisitsa wrote:

"Heartbroken over news of Malaysian Airlines plane catastrophe. Disgusted over attempts to escalate the war using it as a pretext."

Dutch papers took no interest in her tweets:

"At least in Canada they stood by me from the freedom of speech position," recalls Lisitsa. "I won that battle with their help. With Dutch newspapers I was absolutely powerless.

"I pointed out four major lies in one newspaper article. They ignored [them] all."

Among the worst offenders was Dutch public broadcaster NLO. It described Ukrainian-born Lisitsa as a "Russian pianist", before adding:

"In April, the Toronto Symphony Orchestra [TSO] canceled Lisitsa's concert because she had suggested that ethnic Russians in Ukraine arrived in the gas chambers."

Lisitsa sarcastically suggested that "research would have helped" to find out about her real nationality, as well as her thoughts about Ukraine — and the bit about the gas chambers was a complete invention.

Both boycotts, by TSO and KLM, resulted from the concerted actions of Ukrainian-Canadians.

When asked to reveal their identities, KLM simply said:

"We won't show the complaints."

You can shout "lies,lies,lies!" and stomp your little foot — but facts are stubborn things, particularly in court. @NLebrecht @RenieriArts

Except for the fact that Lisitsa's soundtracks were last featured in November 2004.

"He posted a lie. One could just as easily say I was dropped by kindergarten just because I am not there anymore."

She then told Mr Lebrecht:

"Your 'Lufthansa' story is an example of defamation and intentional damage to reputation. I am taking legal action."

Mr Lebrecht is not new to slander. In 2007 the Independent reported how he "lost a defamation battle with the head of Naxos, the largest independent classical record label, Klaus Heymann."

We Support You, But We Can't Say It In Public

Lisitsa is "heartbroken" by the reaction of some people she has worked with for a long time:

"One [person] said that he knows well I didn't say the things I am accused of, but he feels uncomfortable supporting me because his co-worker lost a friend on that plane."

© Wikipedia
Censored Toronto Pianist Lisitsa to Sputnik: 'They Offered Me Money to be Quiet'
"I asked: 'but if you know it's not true, why don't you talk to your colleague.' No answer. The same [happened with] many in [the] music business: we support you and your position in private, but sorry, we can't say anything publicly."

With her friends Lisitsa decided to test the fairness of KLM's complaints procedure by raising the issue of the movie "American Sniper", still offered by KLM's in-flight entertainment system.

Infamous for lines such as: "I couldn't give a flying f…ck about the Iraqis" and "I hate the damned savages" — the movie has attracted widespread criticism. The Guardian described the protagonist as "a hate-filled killer". The Associated Press warned of "anti-Muslim propaganda". Bill Maher blasted the movie as the "pro-war propaganda of a psychopath".

"We tried to emulate the same amount of passenger complaints against the movie 'American Sniper. But we didn't even get a response from the airline. Yet they obliged the accuser in my case after a single tweet."

"With shaming, bullying campaigns [that's] the way it works: if they get a victory of sorts, they get inspired and go on attacking. This is in fact already happening. I feel that the only way to fight the accusations is to get someone in court on all the lies."