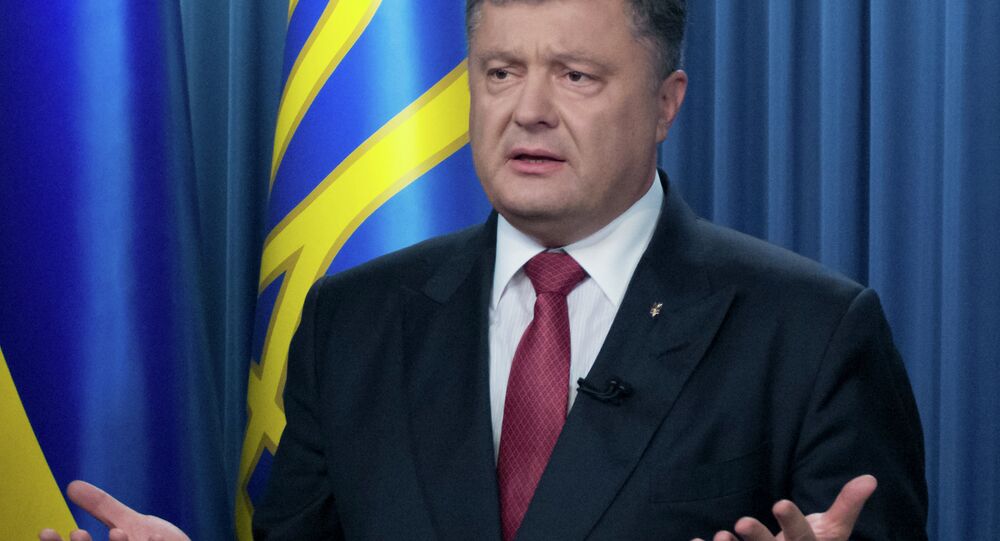 The British news channel Sky News has jumped at a chance to accuse Russia of the recent violence in Kiev and the death of three policemen, quoting President Poroshenko; however the Ukrainian head of state seems to have said something entirely different…let’s have a look.

“Ukraine's president has laid the blame for the murder of three policemen during a right wing demonstration on Monday firmly at the doors of the Kremlin, accusing Russia of extending its 'campaign of destabilization", the channel posted on its website following an interview with Poroshenko.

© REUTERS / Valentyn Ogirenko
Blast Heard Near Ukraine's Parliament as Protesters Clash With Police: Some 100 Injured
However the article did not illustrate these words with a piece from his interview, cutting out the first lines of the conversation.

And this is what President Poshenko actually told the reporter:

“We understand that aggressor [apparently Russia] want to have the destabilization scenario, using the far right groups. But me, as Ukrainian president and Ukrainian government do not allow it.”

He even specified that he “does not feel vulnerable and endangered”, even though his position might be the most difficult among “all the presidents of the world”.

However Poroshenko did not miss his chance to accuse Russia of aggression.

© REUTERS / Stringer
Ukraine’s Protesters Were Paid to Storm Parliament?
“It is not an easy job [to be] the leader of the country which is under aggression of the Russian Federation,” he said.

He tried to explain why he considered Russia so aggressive.

“The main reason for Russia to make an aggression against Ukraine is that they want to prohibit Ukraine to go to Europe. Russia and Russian leadership unfortunately take the right on himself that they will decide if Ukraine has a right to be a European or not. We do not allow that. We are not Russia.”

© Sputnik / Stringer
Kiev Riots Herald the Coming of Chaos to Ukraine
Interestingly enough, two days ago Ukraine's former prime minister Mykola Azarov said that the recent violence in Kiev might have been a provocation that had been staged by the country’s authorities all along.

In his interview with the Russian channel RT, he suggtested that the Ukrainian authorities were trying to show the West how hard it is for Poroshenko to implement the Minsk accords, as people would take to streets to demonstrate violently against  a minor amendment to the constitution.