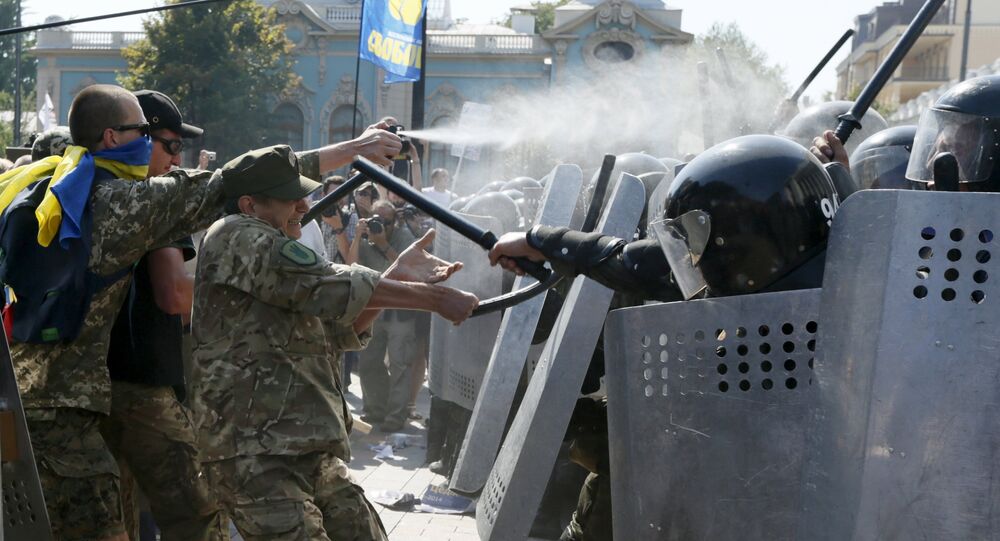 Radicals who organized murderous clashes with security forces in Ukraine's Capital Kiev this week may be closely aligned with the militants responsible for the Maidan riots in 2014, experts told Sputnik.

© AP Photo / Andrew Lubimov
At War With Common Sense: Ukraine's New Military Doctrine Names Russia as Main Adversary
WASHINGTON (Sputnik) — Ukrainian right-wing extremists who ignited deadly clashes with security forces in Kiev this week are the same as, or closely aligned with, the militants responsible for the Maidan riots in 2014, experts told Sputnik.

On Monday, violent clashes between riot police and ultra-nationalists erupted after Ukrainian lawmakers passed a draft amendment to decentralize power as required by the Minsk agreements.

Ukraine Interior Minister Arsen Avakov alleges that the nationalist Svoboda political party and its leader are responsible for the violence, a claim Avakov backs up with videos, photos and the fact the rioters wore t-shirts adorned with the Svoboda party logo.

"The people committing violence in Kiev [on Monday] were probably much more closely related to those towards the end of the Maidan, when right wing militias… sought violent confrontation with the security forces," Woodrow Wilson Center scholar Michael Kofman told Sputnik. "I can't say they are the same, but undoubtedly closely associated."

There is cause for alarm, Kofman noted, when policemen get killed by hand grenades in reaction to a parliamentary proposal.

"This is not just a protest," Kofman explained. "Normal people do not protest with grenades."

Monday’s violence was a strong reminder that Ukraine still has a long way to go toward national consolidation, he added.

The riots erupted because the Ukrainian government failed to lay the groundwork for the constitutional reform process, Kofman argued.

© Sputnik / Evgeny Kotenko
She'll Be Back? Yulia Tymoshenko Has Her Sights on Ukraine's Premiership
"Ukraine largely misspent March-July and its leaders did not prepare the public for the prospect that constitutional amendments, special status laws or other compromises would be involved in adherence to the Minsk agreement," Kofman said.

Geopolitical analyst and stopImperialism.com editor Eric Draitser told Sputnik that the clashes on Monday in Kiev were emblematic of how right-wing groups hijacked the Maidan protests.

"This is really what fascism looks like, this is how fascists operate," Draitser asserted when asked about the Svoboda-led attack outside of Ukraine’s parliament building.

Draitser claimed that critics, including himself, have been derided in the media for daring to suggest that Nazi and fascist elements have dominated Ukrainian politics since the outset of the Maidan crisis in 2014.

Fascists are discontented with President Petro Poroshenko, Draitser suggested, for the president’s inability to defeat the independence supporters in southeastern Ukraine.

© REUTERS / Stringer
EU Waking Up to Reality in Ukraine – Russian Envoy
Hence, he argued, the right-wing groups will never support legislation that would afford their adversaries local autonomy.

"The decentralization bill is a slap in the face to the fascists, who want to see Donbas ethnically cleansed," Draitser asserted.

What is most alarming is how these right-wing elements are able to wreak havoc and attack government security forces with impunity, he added.

"The Nazi element, Svoboda, the Right Sector, the Azov Battalion, all of these various factions… are able to do what they want and get away with it," Draitser concluded.

On Wednesday, a Kiev court authorized the arrest of seven individuals suspected of actively participating in the violent riots which prosecutors have qualified as a terrorist act.

Kiev Riots Herald the Coming of Chaos to Ukraine

Lugansk Republic Switches to Ruble Due to Kiev-Imposed Blockade - Kremlin