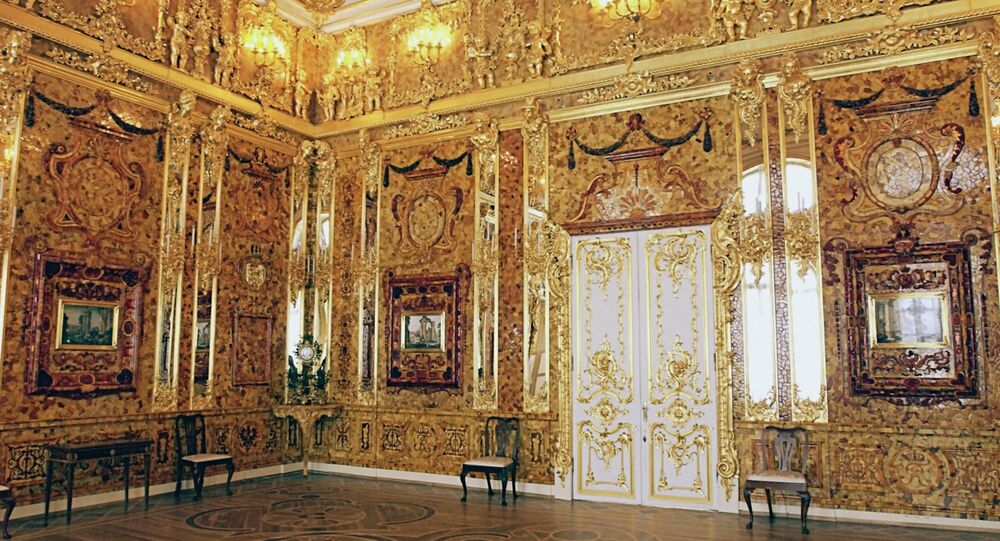 The Amber Room in the Ekaterininsky palace in the city of Tsarskoe Selo near St. Petersburg, Russia pic.twitter.com/1lm0eB176c

"What's fascinating of course is that in Saint Petersburg now they built a replica, which is just stunning. But to find the original [Amber Room] would be the greatest find. There is just a chance that it might be on the train. … It would be wonderful if it would be there," Bower asserted.

The Amber Room, presented to Tsar Peter the Great by the King of Prussia, was one of countless valuable objects the Nazis stole during the war. In the chaotic final months of WWII they hid as many riches as possible and the priceless treasure, including works of art, gold, jewelry and china, remains largely undiscovered.

© AP Photo
Hitler’s Hoard: Mysterious Nazi Gold Train Allegedly Found in Poland
The Nazis "put lots of loot on submarines to South America. They took loot to Austria. They took it even to North Africa…. Obviously, they hid a lot in Germany itself. … The discovery of an armored train hidden in Poland arouses lots of interest that this could be one of those treasure trains carrying more Nazi gold," the author said.

This particular train could contain "huge art collections perhaps taken from the Soviets' collections, especially around Saint Petersburg," he added.

The remarkable thing about the latest discovery is that a whole train was uncovered.

"And the question is why the tunnel was sealed at the end of the war and was only discovered so recently. That is the great mystery. Perhaps, the entrance to the tunnel was blown up or perhaps there was some sort of natural earth fall. But that is what is so unusual," Bower noted.

The train, which so far has not been unearthed, is not the first of its kind. American intelligence agencies, according to Bower, uncovered similar trains shortly after the end of the Second World War.

"What has always been speculated is that there is one particular train, which the German Nazis told Allied intelligence officers about. It carried special loot. There was one story which seems to be supported that one train – all the contents – was taken by American intelligence officers and GIs and smuggled back to America by sea in about 1945. Those people stayed rich ever since," the historian observed.

Last week, Polish authorities announced that they had been contacted by lawyers representing a Pole and a German who claim they have located the missing train. The find is said to be a 500-foot long "armored train" carrying guns, "industrial equipment," gems and other valuables.

Once in a Lifetime: 300-Year Old Spanish Treasure Found Near Florida

Could You Be the Owner of 1 Mln Euros of Sunken Treasure?