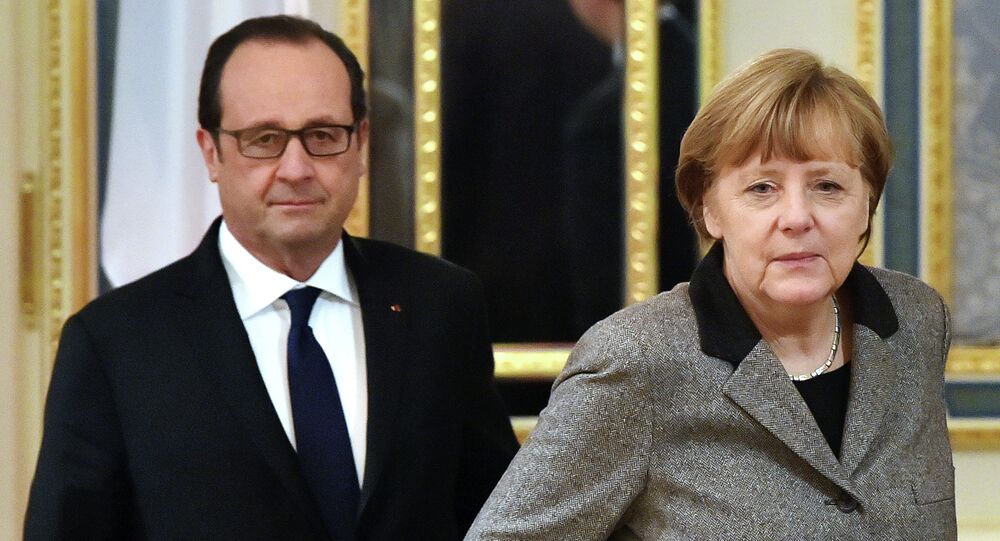 Merkel Under Pressure: France Calls For Reorganization of Europe

The French government has increased pressure on Germany in an attempt to reorganize the Eurozone, but German Chancellor Angela Merkel does not show much enthusiasm over the “project”, DWN reported.

French Minister of Economy Emmanuel Macron advocated for a complete "reorganization of Europe".

© AP Photo / Kay Nietfeld
Germany's Merkel Battles to Keep Europe Together
The Greek debt crisis showed that the monetary union in its current form is doomed to fail, Macron said in an interview with Süddeutsche Zeitung, adding that “the status quo leads to self-destruction."

After the “Greek disaster”, French President Francois Hollande had already stated that the Eurozone needs a redistribution mechanism. French Premier Minister Manuel Valls, for his turn, announced that he would soon present concrete proposals on the issue.

"A monetary union without budgetary regulation – that’s impossible! The strong [countries] should help," Macron continued, adding that one should establish in Brussels a new post of "Euro-commissioner", who would coordinate the economic, financial and social policies of the Eurozone countries.

Commenting on Macron’s proposal, Merkel gave the initiative on the revival of the monetary union positive feedback. However, her attitude to the budgetary regulation was more skeptical.

"Within the European Union, we already have certain financial regulations between net contributors and recipient countries," she said, offering no convincing reorganizational proposal in return.

Grexit of Discord: France Split in Two Parts Over Greek Exit From Eurozone