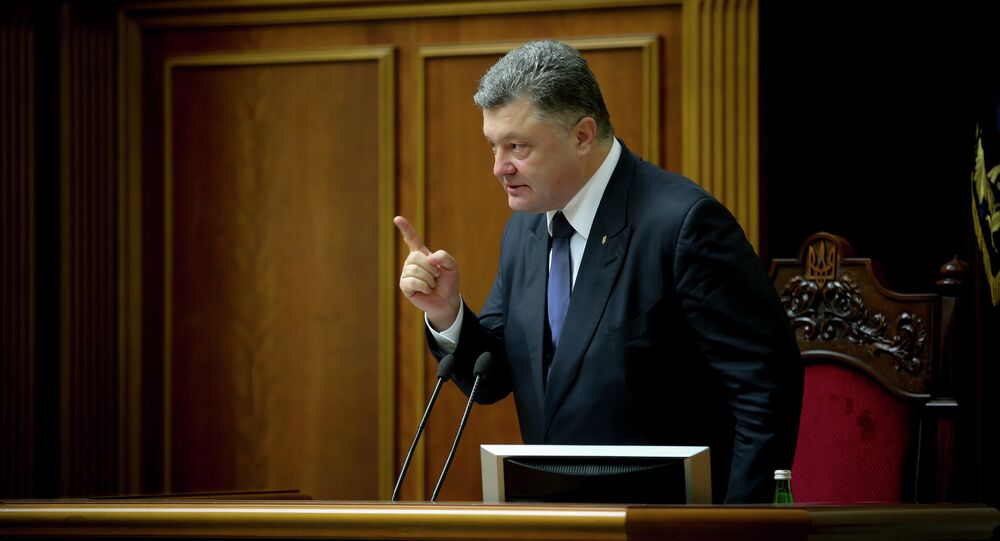 West Disappointed in Poroshenko Over Failure to Cope With Radicals

As evidenced by the turmoil inside and outside of the Verkhovna Rada on Monday, the Ukrainian president is finding it increasingly difficult to mobilize support for the controversial decentralization reform he is pushing through the parliament under the watchful eye of Western capitals.

The measure was backed by 265 out of 450 Ukrainian lawmakers but the bill will have to be supported by at least 300 MPs during the next parliament session and this is where it gets tricky.

"The controversy over the constitutional reform has created a deep rift in the ruling coalition. It is hard to say whether the draft will receive the necessary majority in the end. Should the reform fail, this would be a setback for President Petro Poroshenko," Der Tagespiegel, a liberal German daily, noted.

© REUTERS / Stringer
Poroshenko Calls Violent Clashes in Kiev 'Stab in the Back'
Three parties from the government coalition voted against the constitutional amendment. A member of the Radical Party even called Poroshenko's reform a "betrayal of Ukrainian national interests."

The measure is meant to devolve more powers to the regions of the country, in particular provide greater autonomy for Donetsk and Lugansk. Russia's EU envoy Vladimir Chizhov decried the reform as violating the Minsk agreements, since Donetsk and Lugansk authorities did not take part in the talks on the special status for their region.

Deutsche Wirtschafts Nachrichten (DWN) and Süddeutsche Zeitung underlined how important the decentralization reform was for the West. Angela Merkel and François Hollande pressured Poroshenko to carry it out during their meeting in late August. But pressure does not always yield the desired outcome.

"The situation is becoming increasingly difficult for the West because Poroshenko can no longer mobilize all anti-Russian parties to support his policies. In particular, the extreme right-wing groups refuse to comply with the orders of the president," the DWN noted.

The Monday riots, which left one National Guard officer dead and over 120 injured, were sparked by nationalists from the Svoboda and Radical Party political movements.

Poroshenko: Special Status for Donbass Absent in Amendments to Constitution