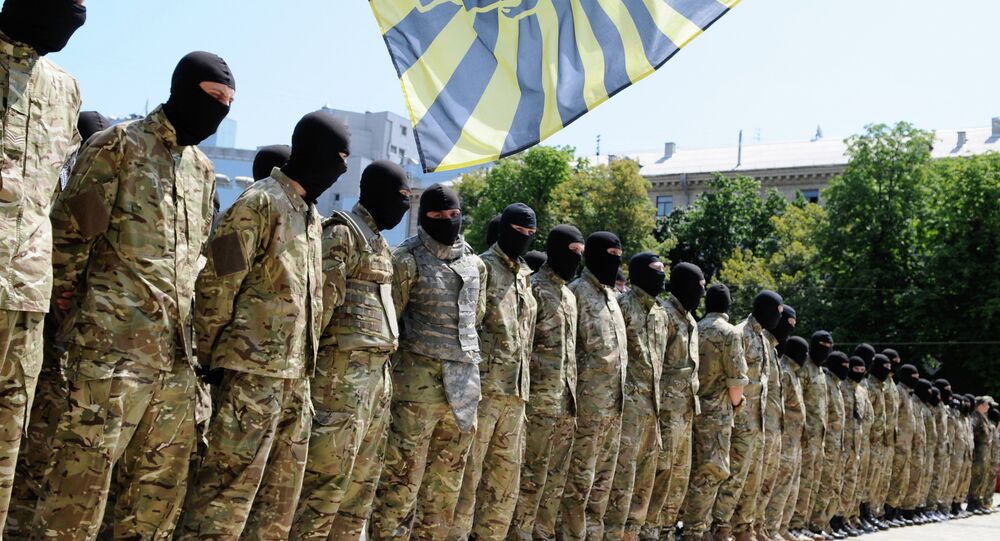 "Kiev Post follows the line of one song. This song is about Ukrainian soldiers defeating their enemies. Now, Russia is the enemy. 'I want the war to end and all Russians to be killed,' a little boy whispered," a Blauer Bote journalist comments.

© Sputnik / Petr Zadorozhny
Nazi Collaborator Bandera, RIght Sector Head Feature on Ukrainian Notebooks
Earlier, the US House of Representatives banned US military instructors from training Azov battalion fighters because of their neo-Nazi ideology. However, Kiev Post tries to disguise the fact with groundless claims about "Russian propaganda," the journalist says.

Nevertheless, recently the media has been trying to hide the fact, the magazine adds.

In the article named "Kiev uses neo-Nazis to fight Donbass militia forces," the Swiss media outlet 20min.ch says: "During its military campaign in eastern Ukraine, Kiev seems to try to exorcise the demon with a devil. Neo-Nazi groups are actively participating in the war. Those battalions are Azov, Dnepr and Donbass."

Alexandr Maksimenko
Who Is White-Washing Ukraine's Azov Battalion?
In a TV program on ZDF channel, devoted to the Ukrainian conflict, members of the Azov battalion were shown. They have the swastikas and runes of the Nazi SS forces on their helmets, Tagesspiegel reports.

That is additional proof that neo-Nazi radicals are fighting for Kiev in its military operation in Donbass, Blauer Bote concludes.