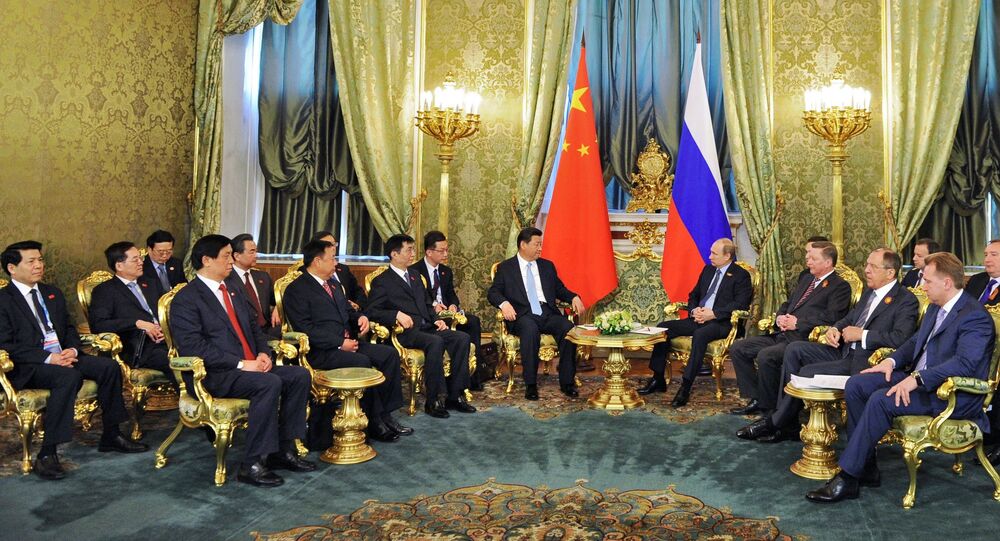 Is Europe Being Marginalized by Russia, China?

France should put itself at the forefront of an effort to forge a close alliance between an independent EU and the BRICS nations, above all Russia and China, the French ex-Premier wrote on Friday.

© AFP 2021 / Emmanuel Dunand
EU Should Orient Its Economy Towards China, Russia – German Economist
Feeling alienated by the growing wave of western criticism and sanctions, Russia is turning towards China.

And with pretty good reason too, as the two nations are equally wary of US pressure and have shared interests in energy, security investments and a wealth of other economic cooperation projects.

And, while the US is trying to isolate Russia for its alleged role in the Ukrainian conflict, Moscow is using its leading role in the five-nation BRICS group to even the score, Jean-Pierre Raffarin wrote in Friday’s issue of Le Huffington Post.

Meanwhile, Washington’s current pivot to Asia and the Pacific is seen by Beijing as a worrying development, just as America’s active fence-mending with Iran is by Moscow.

“And all this is happening at a time when the growing instability in the world and the ongoing war with terrorism call for a closer partnership between the great powers,” the author added.

What Russia and China now need is a strong “European” Europe. Beijing’s financial policy is aimed at preventing the collapse of the Eurozone and Russia apparently wants to deal with a Europe less dependent on Washington.

Russia’s positions in the Middle East have always been strong and Paris and Moscow have a lot of shared interests in Iran. As regards to China, France should embrace its proposed partnership in the Third World.

“Africa, the Arab world and the Middle East offer a great venue for a mutually beneficial partnership between us,” Raffarin emphasized.

The China-Europe-Russia triangle could become a triangle of prosperity as each country has impressive human, natural and financial resources as well as a strong need for new jobs, greater affluence and stability.

The speed of the ongoing rapprochement between Russia and China directly depends on how politically independent the EU countries really are and the leading role France needs to play here. Civil society should have a greater say in the process of political decision-making.

France managed this under François Mitterrand, Jacques Chirac and Nicolas Sarkozy by acting in concert with other European nations,” Jean-Pierre Raffarin wrote in conclusion.

Europe Should Cooperate With Russia, China to Counter US Hegemony