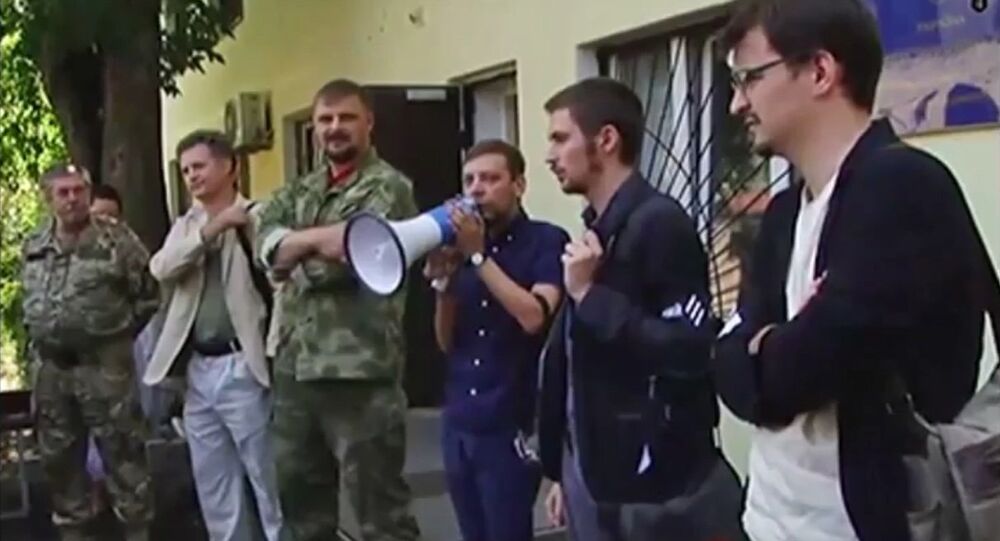 Foreign mercenaries carrying out operations for the Ukrainian army and the Right Sector against the fighters of the Lugansk and Donetsk People's Republics protested outside the Ukraine's migration offices in Kiev, demanding that their presence in Ukraine be made legal via citizenship or residency.

"There are currently about ten volunteer fighters at the migration office, but more are still arriving," said the TV channel early on Friday.

"They have come to demand to be issued either Ukrainian citizenship, or temporary permission to reside on the territory of Ukraine."

"When all the fighters have arrived, they will take their demands to the migration office."

© Sputnik / Iliya Pitalev
Saakashvili Greets Suspected Georgian Mercenaries Fighting in Ukraine
Since the announcement, the Ukrainian president has granted citizenship to US, Georgian and Lithuanian nationals who were appointed to positions in the Ukrainian cabinet, but has so far not afforded mercenaries the same right to remain.

On Friday, the ultra-nationalist Right Sector militant group confirmed that its fighters were taking part in the protest, and reminded Poroshenko of his pledge:

"At this moment we are trying to find out why they are not giving our brothers from other countries citizenship. Right Sector has complained to the State Migration Service."

Fighters for the militia of the self-proclaimed Donetsk and Lugansk People's Republics have repeatedly asserted that they are fighting not only Ukrainian soldiers, but mercenaries speaking in foreign languages including Flemish, French, Polish and English.