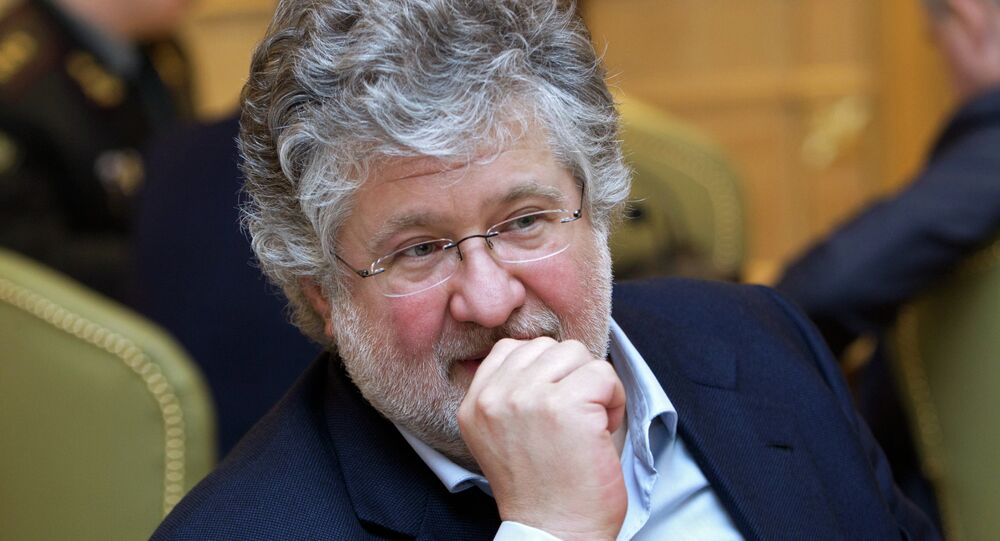 © REUTERS / Valentyn Ogirenko/Files
Where is Kolomoisky? Ukrainian Oligarch Seen at US Basketball Games
A huge chunk of the $17 billion in bailout money the IMF granted to Ukraine in April 2014 has been discovered in a bank account in Cyprus controlled by exiled Ukrainian oligarch Ihor Kolomoyskyi, the German newspaper Deutsche Wirtshafts Nachrichten [DWN] reported on Thursday.

In April last year $3.2 billion was immediately disbursed to Ukraine, and over the following five months, another $4.5 billion was disbursed to the Ukrainian Central Bank in order to stabilize the country's financial system.

"The money should have been used to stabilize the country's ailing banks, but $1.8 billion disappeared down murky channels," writes DWN.

Ihor Kolomoyskyi, the former governor of Dnipropetrovsk, is one of Ukraine's richest businessmen, with a business empire that includes holdings in the energy, media, aviation, chemical and metalwork industries. At the center of Kolomoyskyi's wealth is PrivatBank, Ukraine's largest financial institution, which claimed the bulk – 40 percent – of the bailout money which had been earmarked for stabilizing the banking system.

"Theoretically, the IMF should retain direct control over the distribution of funds. In fact, it seems that the banks chose their own auditors."

DWN notes that the IMF reported in January 2015 that the equity ratio of Ukraine's banking system had dropped to 13.8 percent, from 15.9 percent in late June 2014. By February 2015 even PrivatBank had to be saved from bankruptcy, and was given a 62 million Euro two-year loan from the Central Bank.

"So where have the IMF's billions gone?"

The racket executed by Kolomoyskyi's PrivatBank was uncovered by the Ukrainian anti-corruption initiative 'Nashi Groshi,' meaning 'our money' in Ukrainian.

According to Nashi Groshi's investigations, PrivatBank has connections to 42 Ukrainian companies, which are owned by another 54 offshore companies based in the Caribbean, USA and Cyprus. These companies took out loans from PrivatBank totaling $1.8 billion.

YouTube/@PravdaRu
Biggest Threat to Poroshenko His Inner Circle: Kolomoiskyi on His Dismissal
These Ukrainian companies ordered investment products from six foreign suppliers based in the UK, the Virgin Islands and the Caribbean, and then transferred money to a branch of PrivatBank in Cyprus, ostensibly to pay for the products.

The court's ruling was the same for all 42 companies; the foreign suppliers should return the money, but the credit agreement with Privatbank remains in place.

"Basically, this was a transaction of $1.8 billion abroad, with the help of fake contracts, the siphoning off of assets and violation of existing laws," explained journalist Lesya Ivanovna of Nashi Groshi.

In March Kolomoyskyi was dismissed from his position as governor of Dnipropetrovsk after a power struggle with Ukrainian President Petro Poroshenko; the fraud was carried out while he was governor of the region in East-Central Ukraine.

"The whole story with the court case was only necessary to make it look like the bank itself was not involved in the fraud scheme. Officially it now looks like as if the bank has the products, but in reality they were never delivered," said Ivanovna.

Such business practices have earned Kolomoyskyi a fortune currently estimated by Forbes at $1.27 billion, and were known to investigators beyond Ukraine's borders; Kolomoyskyi was once banned from entering the US due to suspicions of connections with international organized crime.

Despite these suspicions, it appears that Kolomoyskyi is unlikely to face justice, as he is currently living in exile in the US; he fled Ukraine earlier this year. Ukraine has been granted a further $3.6 billion in debt relief from creditors. Russia, despites its membership in development lending institutions, has refused to contribute funds to Ukraine due to concerns emanating from this and other instances of widespread graft.

Ukraine Calls on Russia to Agree With Debt Restructuring Proposals