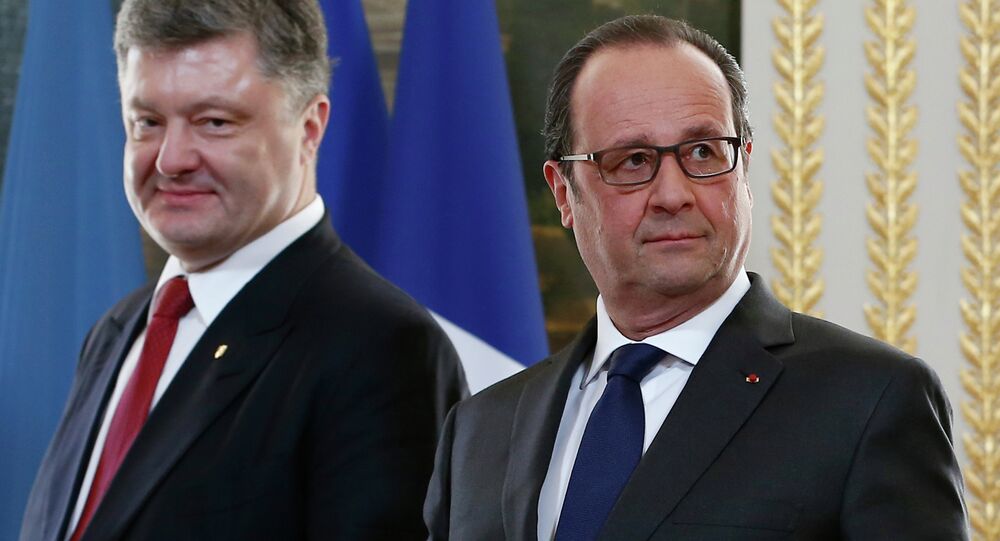 A French TV broadcast showed the French president visibly startled at the apparently shocking revelation that the Ukrainian army has violated the ceasefire agreement agreed upon in Minsk; French politician Thierry Mariani explains why France's press rejected the chance to set the record straight.

© AFP 2020 / JOHN MACDOUGALL
West Preparing Plan B in Event of Minsk Agreement’s Failure
French president Francois Hollande was dealt an apparent shock on French television earlier this year, when his adviser told him during a meeting that contrary to popular disinformation, the Ukrainian army has been violating the ceasefire agreed in Minsk in February by the leaders of Germany, France, Russia and Ukraine.
© AP Photo / Sergei Grits
Fabius to Ukrainians: Stop Pointing Fingers and Stick to Minsk Accords
During the televised briefing from defense advisers on the contents of a dossier on the Ukraine crisis, Hollande commented that he could see contradictions in the coverage of the Ukraine conflict.

In response, an adviser explained to the president the source of his confusion:

"Because the idea that we collectively have not looked at enough, is that it is the Ukrainians who do not respect the ceasefire."

Despite the significance of the moment, which was caught on camera and broadcast by mainstream channel Canal + during an episode of the TV magazine 'Supplement', the French press declined to afford the news proper coverage.

The broadcast of 'Supplement' where the president's briefing was shown, was entitled 'A week with the president.'

The significance of the footage, which despite being first broadcast in April has only now become more widely known, was spotted by French politician Thierry Mariani.

"Admission! [at 7'40 into the broadcast] at a defense meeting Hollande is told that 'it is the Ukrainians who do not respect the ceasefire.'"

"I was watching this broadcast out of the corner of my eye, because more often than not these are just staged shoots, but as often happens during such filming, the director simply forgot to turn off the sound. That's why, when President Hollande is explaining that there are problems in Ukraine, it is plainly visible on the video," said Mariani.

"And then Jacques Audibert says to him that nevertheless, there is confirmation that Ukrainians are breaking the ceasefire, and then you see the irritation on Hollande's face, before the camera cuts away."

Mariani, who from 2011-2012 served as France's Secretary of State for Transport, told Radio Sputnik the reasons behind the reluctance of the mainstream French press to disseminate all the facts about the Ukraine crisis.

"Because this is not the official truth," explained Mariani.

"Everybody knows that for the majority of the media in France there is good and bad, and of course, the Ukrainians are systematically portrayed as victims who never violate the ceasefire."

"Of course, it is the representatives of the Lugansk and Donetsk People's Republics which commit the violations."

"The advice of the diplomatic adviser which, it should be remembered, confirms the statements of military intelligence made a few weeks beforehand, runs counter to that."

"He told the truth, that's why the filming was quickly cut," explained Mariani.

Meeting of Subgroups on Ukraine to Start in Minsk Wednesday

West Preparing Plan B in Event of Minsk Agreement’s Failure

Merkel: Trilateral Meeting Aimed to Support Minsk-II, Not Put it in Doubt