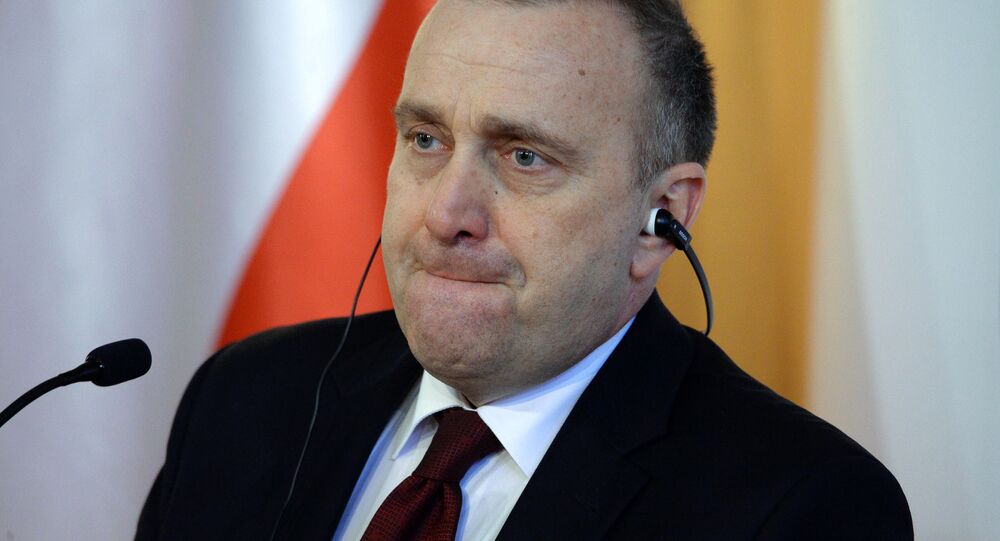 Polish Foreign Minister Grzegorz Schetyna slammed President Andrzej Duda on Tuesday over a proposal to change the format of talks on the resolution of the crisis in Ukraine, calling the remarks "unfortunate and awkward," and emphasizing that foreign policy is the domain of the Polish government, and not just that of the president.

© AFP 2021 / JOHN MACDOUGALL
Merkel, Hollande Rule Out Siding With Poroshenko Against Russia
Late last week, Duda had reiterated ideas which had been floated earlier by the Foreign Ministry about Poland joining the Normandy format, a diplomatic group comprised of the leaders of Russia, Ukraine, France and Germany, who have held several rounds of talks aimed at bringing the Ukrainian civil war to a close.

Schetyna told Polish media that President Duda's remarks were "unfortunate and awkward," adding that "the Normandy Format and the implementation of the Minsk agreements are the key —important and very delicate elements to ensuring peace and reconciliation in Europe. Therefore, we must support this format, these talks, the same way all the other countries of the European Union do." Noting that the peace process is not advancing as actively as Warsaw might like, the foreign minister noted that while "this formula is not perfect, there is no alternative to it at present."

Hinting at the emergence of a political conflict between the president and the foreign ministry, Schetyna noted that the government had only found out about the president's initiative in the press. "We cannot conduct our foreign policy through the media," Schetyna said.

© REUTERS / Mykola Lazarenko/Ukrainian Presidential Press Service
Extending Normandy Format Talks on Ukraine Unreasonable
The minister added that foreign policy is the responsibility of the government in cooperation with the president, suggesting that Duda's declarations contradicted Poland's foreign policy position. On Tuesday, Duda's Law and Justice Party had declared that the president's remarks about a new format for talks on Ukraine were actually the continuation of the Polish foreign ministry policy.

In February 2015, the Normandy Four group worked out a ceasefire deal in Minsk, which was eventually signed by Kiev and pro-independence and autonomy supporters in Donbass. The truce included a set of measures aimed at ending the civil war in Ukraine's Donbass region.