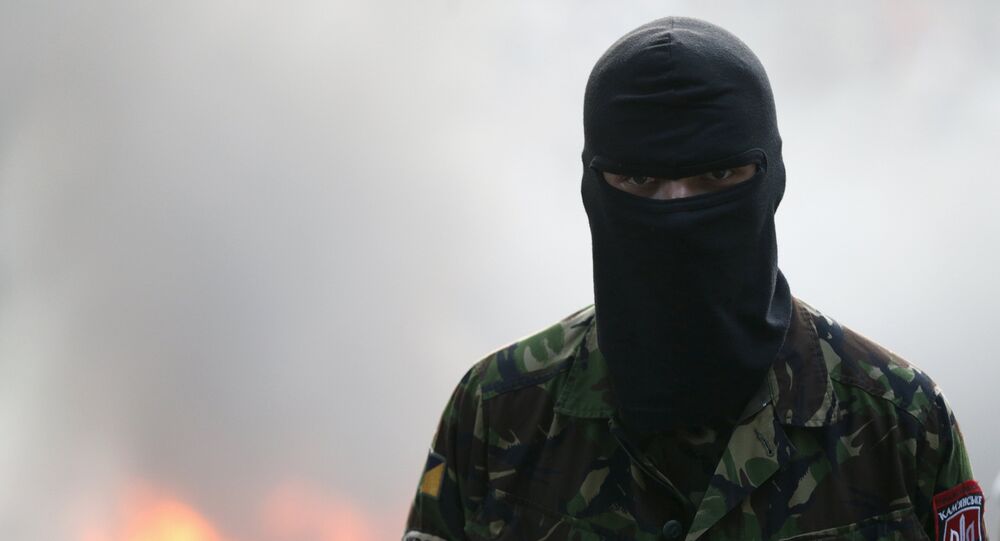 Although Kiev is scared of the ultra-nationalist Right Sector organization, it keeps using the extremists for its own purposes when their actions happen to benefit the government, French newspaper Le Figaro said.

The extremist group is out of control, as they are doing whatever they want and are essentially outside of the Ukrainian law.

Earlier this week, the ultranationalists organized a raid on a suspected underground casino near a rail terminal in Kharkov, smashing slot machines with baseball bats and attacking staff and people who were playing there. Although the police were present, they were powerless to stop the rampage.

One the one hand, Kiev fears the Right Sector, as it can't control the ultranationalists; on the other hand, the government uses their help in Donbass, where the militants have played a key role in fighting against East Ukrainian militia, Le Figaro said.

A Le Figaro correspondent managed to speak with some Right Sector militants currently stationed near Dnepropetrovsk.

"Why I joined the Right Sector? I want to defend my country. But in the Ministry of Defense there are only traitors, and I don't want to fight alongside traitors," a militant named Volya told Le Figaro.

© Sputnik / Stringer
Right Sector Gives No Rest to Ukrainian Government – German Newspaper
Leaders of a number of nearby European countries fear that the Right Sector may pose a serious threat to European security. Thus, Polish politician Miroslaw Orzechowski stated that Poland should enhance its security as Right Sector is "especially dangerous" for his country.

The Right Sector, an ultranationalist confederation of paramilitaries that arose in November 2013, is known to have played a key role in ensuring the success of the Maidan coup d'état of February 2014. The group later organized a series of "territorial defense battalions," located throughout the country, which have since become known for their brutality in crushing the anti-Maidan protest movement in central and eastern Ukraine.

Donbass residents have accused the group's battalions of committing war crimes in the course of the ongoing civil war in eastern Ukraine, while independent observers have pointed to the militants' alleged use as blocking battalions in the warzone. The group's leader, Dmytro Yarosh, has since been listed wanted by Interpol.