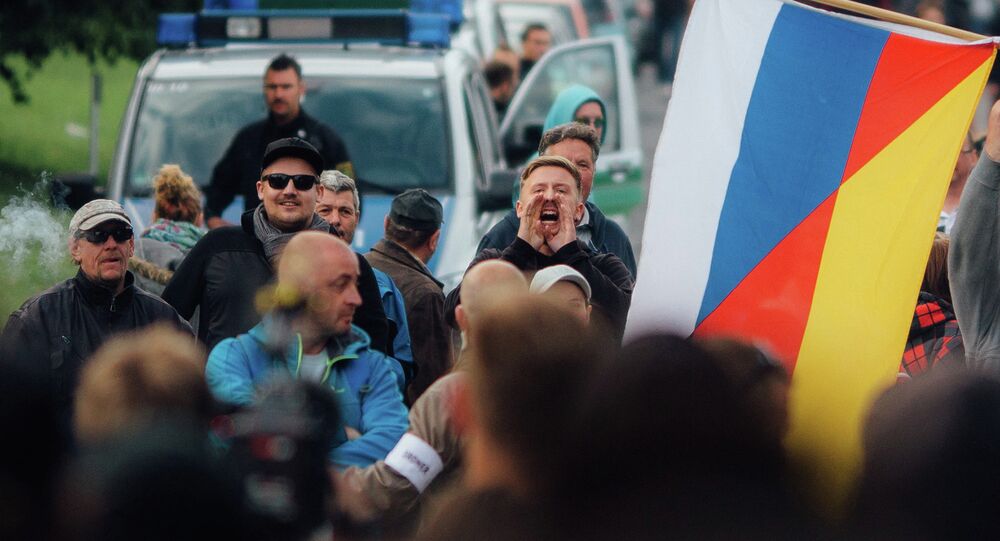 Hatred and violence against migrants are on the rise in Germany, Interior Minister Thomas de Maiziere said Sunday.

BERLIN (Sputnik) — De Maiziere told the Bild am Sonntag newspaper in an interview that Germany would use "the full weight of the law" against those violating migrants' rights.

“We see a tremendous wave of aid proposals, but also an increase in hatred, insults and violence against migrants. This is disgraceful and indecent for our country,” de Maiziere said.

© REUTERS / OGNEN TEOFILOVSKI
Migrant Crisis May Tear Apart 'Selfish' EU – Italian FM
De Maiziere spoke as violent clashes between police and anti-migrant protesters have continued into the second day on Sunday. At least 31 police officers were injured on Saturday as demonstrators attacked a new refugee center in the town of Heidenau, near Dresden.

On Wednesday, de Maiziere said up to 800,000 asylum seekers and refugees were expected to arrive in the country by the end of the year, three times as many as in 2014.

A huge influx of refugees has prompted broad public debate in Germany. Municipalities say they do not have the resources to accommodate them and far-right extremists commit attacks on refugee shelters.