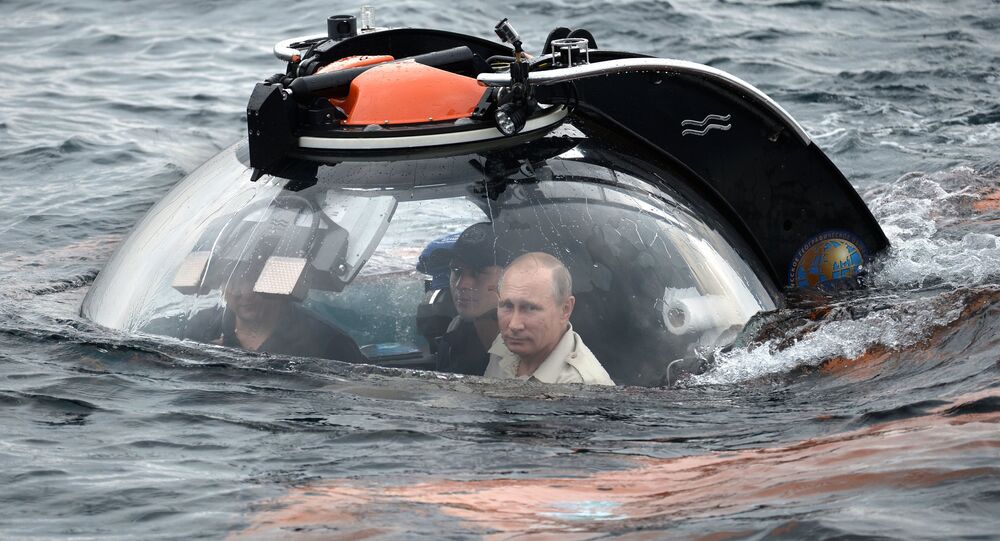 President Vladimir Putin’s visit to Crimea earlier this week was all but ignored by Western media even though it would have invited angry flack just eighteen months ago, a prominent British journalist wrote on Friday.

Ukrainian President Poroshenko’s fierce condemnation of the visit — he called it “a challenge to the civilized world” — seemed to fall on deaf ears, as none of the major Western leaders criticized Putin’s trip to the ‘annexed’ peninsula, Neil Clark wrote.

© Sputnik / Konstantin Chalabov
Putin Warns External Forces Will Try to Destabilize Crimea
When the Crimean referendum took place in March 2014, the condemnation of Russia was intense. Putin’s visit to Crimea this week — when he took a dive in a mini submarine to explore Byzantine era wreckage off Crimea’s Black Sea coast — was noticeably different. There were jokes about him looking for signs of the ruble, nothing else.

Sky News referred to Putin as “daring.” CNN in its coverage of the event used Sevastopol, Crimea as the locator and not Ukraine (though they did state on their website that Crimea was “Ukrainian territory”).

Putin’s visit was described elsewhere as ‘controversial’, but that’s about as far as it went, Clark noted.

The muted reaction to Putin’s visit is not the only sign that things could be calming down. Crimea has already been visited by a delegation of French MPs from Nicolas Sarkozy’‘s Republican Party.

Italian Parliamentarians have announced plans to visit. It’s been reported that Polish MPs are mulling a trip to the peninsula, as are MPs from Germany’s progressive Die Linke party.

The hope of the neocons that a strict Western boycott of Crimea would be observed has clearly not been realized. Even though visiting the province doesn’t necessarily mean endorsement of it being part of Russia — it does show cracks in the ‘hardline’ approach.

“Western journalists who do know a bit of regional history have undermined the neocon cause, which is fatally weakened by the fact that Crimea was part of Russia between 1783 and 1954 (when it was transferred to the Ukrainian Soviet Socialist Republic by Khrushchev) and the fact that the majority of people who live there are Russians,” Neil Clark observed.

Crimea’s referendum was a direct consequence of a ’regime change’ which Western leaders welcomed.

“That regime change shattered the consensus under which the country had been governed since the end of the Soviet Union, and which reflected the divisions in the country. The basis of that consensus was that democratic election results would be respected, and that the leaders of Ukraine would also make compromises on foreign policy orientation — maintaining friendly relations with both Russia and the West and not going out of their way to antagonize either,” Clark continued.

The consensus also meant respecting the full language and other rights of Ukraine’s minorities, which was shattered by what happened in February 2014.

Ukraine’s Russian population felt threatened by the ousting of a President and a government they had largely supported — and in particular were concerned over the prominent role that virulently anti-Russian far-right groups played in the so-called ‘democratic’ uprising.

“The reality is Crimea is now part of Russia again — and no amount of neocon rage will change this,” Neil Clark wrote in conclusion.