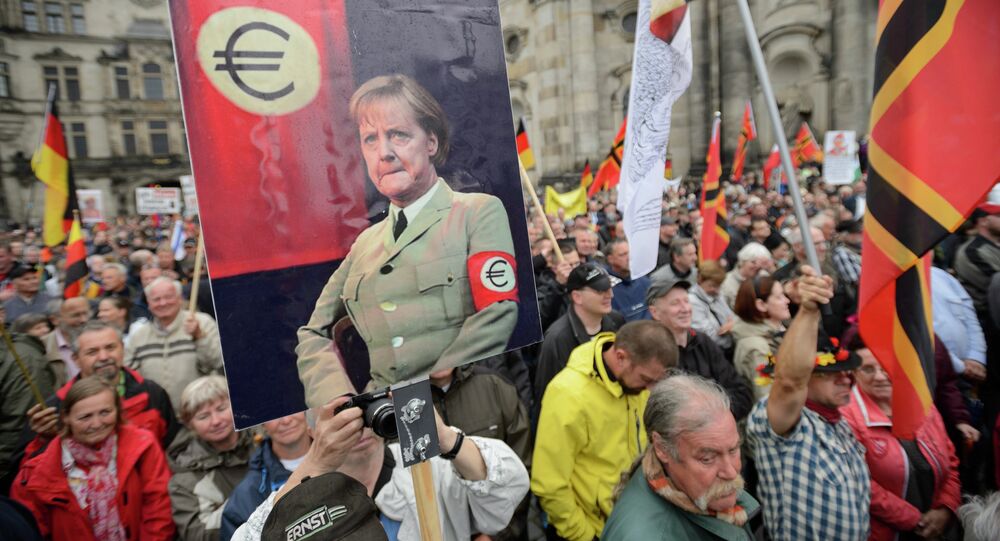 In an angry op-ed for widely-read German newspaper Zeit Online on Friday, columnist Stefan Schirmer, fed up with what he says are the high levels of "hate, extremism and self-isolation" prevalent in the German state of Saxony, asked whether it's time to consider kicking the southeast region out of the country, via a measure he dubbed the 'Säxit'.

© AP Photo / Jens Meyer
Is Ugly Germany Back? Country Rocked by Increase in Anti-Refugee Violence
The journalist began his angry commentary by noting that "for several months now, Saxony has shown itself to be the most unpleasant state in Germany. It makes headlines with Pegida protests, its right wing extremists, and with its [constant] attacks on refugees. The question thus arises: is it time for a Säxit –for Saxony's exit from the Federal Republic?"

Schirmer vented that "almost daily the level of the polemic is being raised…Whether in Freital, Meissen, Freiberg, Hoyerswerda or Böhlen, in all these cities xenophobic attitudes have turned into violence. Out of the 202 attacks on shelters for refugees in the first half of 2015, 42 took place in Saxony. The state is, in the worst sense of the phrase, in a class of its own."

The journalist angrily noted that "the typical Saxonite of today is not a Kati Witt [Olympic figure skater], a Kurt Biedenkopf [a federal politician] or an Erich Kastner [author and poet]. He is represented by a pensioner, who hasn't reached retirement age, sipping bear in front of a tavern, and greeting passerby with the traditional Nazi salute."

© Flickr / Montecruz Foto
Clashes Between Migrants, Police in Germany Injure 15
"Now one could argue that even in Freital or Dresden there are people who are ready to help migrants, and that political radicals or simply cold-hearted citizens could be found everywhere," Schirmer admitted. "But while this may be true, the conditions in Saxony are much more glaring, depraved, and dangerous. Studies have demonstrated that when it comes to commitment to the principles of democracy and tolerance, the levels of Saxony's 4 million residents are consistently lower than among Germany as a whole."

"What's going on here?" Schirmer asks rhetorically. "This question was asked years ago, when the NPD [a far-right political party] managed to take 25 percent of the vote in Saxony's region of Switzerland. Or when Europe's largest neo-Nazi march took place in Dresden. And for months now, every Monday, the so-called 'Patriotic Europeans Against the Islamization of the West' (Pegida) continue to follow the calls of their convicted criminal fellow-Saxonite, who calls refugees nothing more than "stupid cows". Pegida continues to attract thousands. It is clear now that this movement is a Saxonite phenomenon in the first place."

© AP Photo / Oliver Killig / dpa via AP
Anti-Immigration Germany: Protests Flood Saxony Town
The columnist angrily recalls Saxony protestant bishop Carsten Rentzing's comment this past June that as far as Pegida's continued protests are concerned, "as long as the demonstrations follow the rules of society, no one has the right to criticize them."

In Schirmer's estimation, the pastor's "phrase sounded as if Rentzing was actually begging to separate from the rest of Germany, where people in their majority think very different [in regards to Pegida's activists]. Perhaps this is something that should been followed through with?"

The journalist noted that "then the many Saxonites who are ready to get along with the ideas of Pegida would no longer have to listen to moral reproaches from the rest of the country. Instead, 'true patriotism' could flourish between Bad Schandau and Niederwürschintz – that 'Saxony Pride', propagated for the last 25 years in local parliament by the long-reining Christian Democratic Union…And Premier Stanislaw Tillich could dismiss all accusations about his unwillingness to recognize the serious problem of right-wing extremism as an attempt to interfere in Saxony's internal affairs."

© AP Photo / Matthias Schrader
Germany to Become Home to More Than 750,000 Refugees in 2015
As far as Germany is concerned, Schirmer noted that "we would no longer have to blush from Saxony's lack of empathy, despite the fact that the region itself is dependent on subsidies. To date this federal territory generates independently only 44 percent of its own budget, in contrast to Bavaria, where there are also many supporters of independence."

The journalist concluded by asking, rhetorically, whether a 'Säxit' would be unjust. "Shouldn't we recognize the merits of Saxony's people –the heroes of the peaceful revolution of 1989? Haven't they faced humiliation in the past 25 years? Perhaps they have. But when we met with arrogance, when humiliation turns to hatred, when the majority of decent people cannot reason with a heartless minority –which dominates the picture, then perhaps Saxony should just become its own country. I'm serious."

Bring Back Border Control: German Police Ask for Help to Deal With Migrants