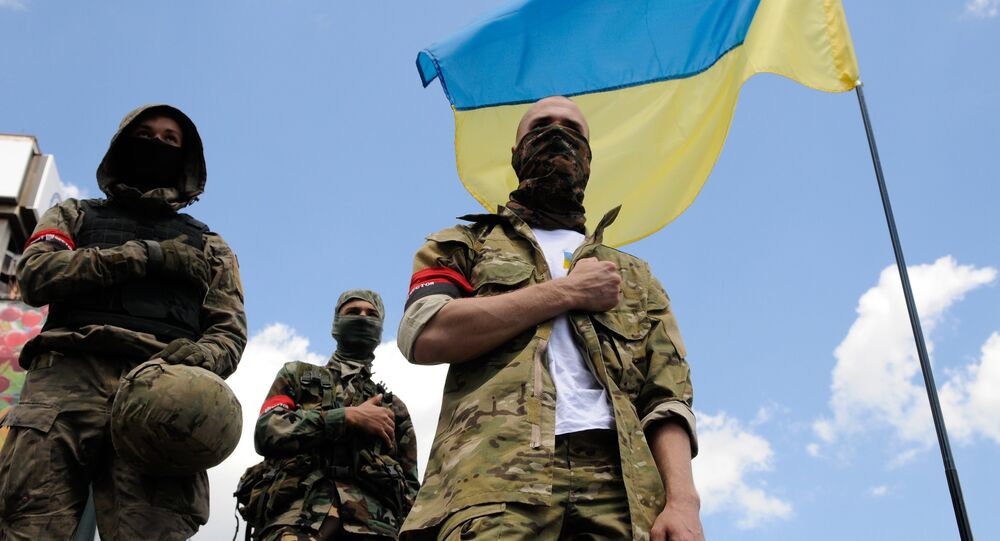 Militants from the notorious ultranationalist organization Right Sector have taken it upon themselves to become the de-facto police force in a section of the eastern Ukrainian city of Kharkiv, with local security organs seemingly powerless to stop them.

© AP Photo / Evgeniy Maloletka
Disenchanted Ukrainian Army 'Expressing Admiration for Right Sector'
Ukrainian media report that the militants, armed with baseball bats and other blunt objects, wearing balaclavas and featuring the distinctive red-black badges on their army fatigue uniforms, have organized themselves into 'patrols' in areas surrounding the rail terminal, located in the west-central portion of the city.

With the city's transport police presently absent, facing reorganization, the militants have subjected the district to systematic terror, roving the streets, attacking suspected wrongdoers, and organizing group raids on businesses and shops.

Earlier this week, the militants organized a raid on a suspected underground slots casino near the rail terminal, smashing slot machines with bats and chairs and attacking workers and players, spraying them with pepper spray and forcing them to the ground on the asphalt outside the building. The police were present, but appeared powerless to do anything to stop the rampage.

Then on Wednesday, the militants were reported to have 'closed' a pharmacy, smashing up the office, carrying out pain medication and burning it in front of the building. This follows on similar incidents taking place last month, when militants burst into two pharmacies and trashed them, allegedly for the fact that they were selling pain medications with the morphine-derived drug codeine.

Earlier, Right Sector militants carried out an attack on the office and bus of 'Opposition Bloc', an opposition party organized out of the remnants of Ukraine's former governing Party of Regions.

© AFP 2021 / GENYA SAVILOV
Terrorist Threat From Ukrainian Nationalists Rising in Crimea
Local Right Sector organizer Andrei Sanin proudly told Ukraine's Vesti newspaper that since the beginning of the group's patrols, the number of crimes in the area has gone down considerably. "We are not the police; we can do things a little more radically," he noted.

The militant added that while the group knows that "we do not have the formal right to a lot of things, in a situation where there is a war going on, and our valiant police force has left [the area], we are acting in accordance with our Constitution. Everyone has a right to defend their homeland." Vesti noted that the organization is now looking to establish more patrols, in other parts of the city, with only a lack of manpower hindering them from doing so.

Ukrainian social media have voiced their outrage over their incidents, some leaving sarcastic comments such as: "with no monuments left, it's time to move on to pharmacies." Others indignantly asked "where the police are?" Answering this question, Vesti explained that Kharkiv's enfeebled police force seems unable or unwilling to do anything to stop the militants' vigilantism.

© REUTERS / Valentyn Ogirenko
Ukraine’s Right Sector Plans to Repeat Bloodbath in Odessa
Kharkiv Interior Ministry advisor Alexander Sirota told the newspaper that while "any assistance in ensuring public order is welcomed in all countries and at all times, how this assistance is provided is another question. If they had blocked off this gaming establishment and called the police, that would be right. But when they smash private property –that is an offense. Nobody has a right to just go out into the street and declare that they are 'protecting public order'."

But the police's reaction does not appear to be limited to mere lack of action. The Right Sector has been reported to openly cooperate with the police, for example by handing the majority of their 'arrests' to them. The police, in response, has not stepped into open conflict with the militants, refusing to charge them for the unauthorized use of force or the destruction of property, even when they are present at the militants' raids. The Kharkiv Interior Ministry's press service explained away this oddity by noting that it has received no complaints, either from the raid on the underground casino, or from the attack on the Opposition Bloc offices.

Some Ukrainian and Russian media have suggested that the situation is potentially an explosive one, recalling that had occurred in Mukacheve, western Ukraine last month, when heavily armed Right Sector militants shot it out with local police over cigarette smuggling routes. It remains to be seen just how much longer Kharkiv's security organs will be willing to tolerate Right Sector's unique and brutal brand of vigilante justice.

© Sputnik / Stringer
Endless War: US Training New 'Monsters' in Ukraine
The Right Sector, an ultranationalist confederation of paramilitaries springing up in November 2013, is known to have played a key role in ensuring the success of the Maidan coup d'état of February 2014. The group later organized a series of 'territorial defense battalions', located throughout the country, which have since become known for their brutality in crushing the anti-Maidan protest movement in central and eastern Ukraine. Donbass residents have accused the group's battalions of committing war crimes in the course of the ongoing civil war in eastern Ukraine, while independent observers have pointed to the militants' alleged use as blocking battalions in the warzone. In late 2014, the Russian Supreme Court declared the Right Sector an extremist organization, banning its activity on the territory of the Russian Federation. The group's leader, Dmytro Yarosh, has since been listed wanted by Interpol.
...
Reddit
Google+
Blogger
Pinterest
StumbleUpon
Telegram
WhatsApp
820