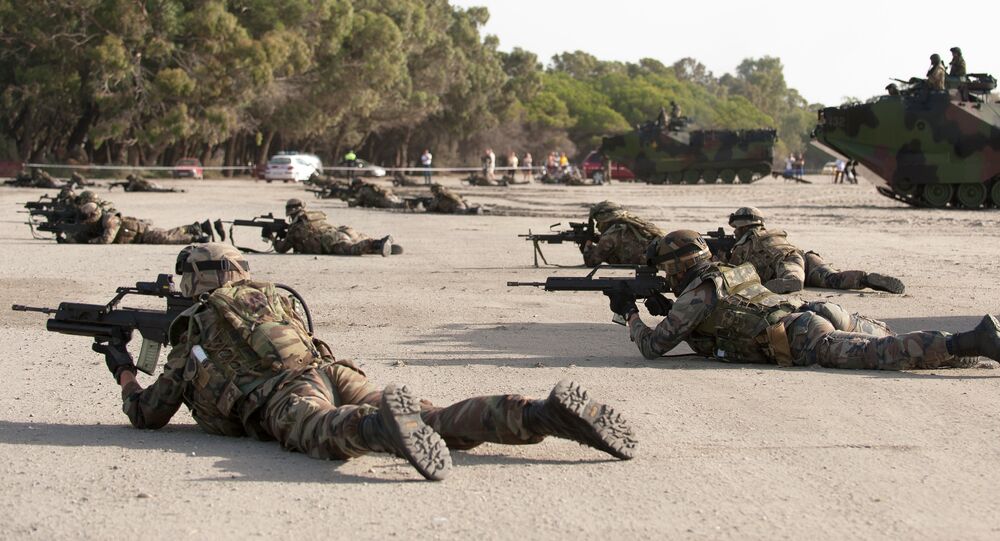 The activists decided to protest because because they do not want "maneuvers or military settlements" in Zaragoza.

© AP Photo / Daniel Tejedor
NATO Constructs Tent City in Spain for Largest Military Drills in History
MADRID (Sputnik) – Anti-NATO groups in Spain’s Zaragoza are preparing a military-style campaign of opposition and mobilization against the bloc, which will hold its Trident Juncture military exercise in the city, a member of the platform told Sputnik.

"We are receiving NATO with an opposition campaign and oppositions. In September we shall begin a publicity campaign located in the neighborhoods, finishing with a big event in the city center with specialists in the field. The mobilization campaigns will start after mid-September," Hector Martinez said.

#TJ15 will launch at the end of September. Learn about preparations underway in #Spain: http://t.co/WhyQfD5guS #NATO pic.twitter.com/sHXK4qngvw

The organization, comprising social, neighboring and political movements, prepared the campaign because it does not want "maneuvers or military settlements" in Zaragoza.

The Trident Juncture drills will take place from September 28 to November 6 in Spain, Italy, Portugal as well as in the Mediterranean Sea and the Atlantic Ocean. Approximately 36,000 personnel from over 30 NATO and partner nations will participate.

The pronounced aim of the drills is to train and test the NATO Response Force, a technologically-advanced high-readiness unit comprising land, air, maritime forces.

Spain joined NATO in 1982. Today Spain maintains two military bases with a permanent US presence – an air base in Seville and a combined air and naval base in Cadiz.