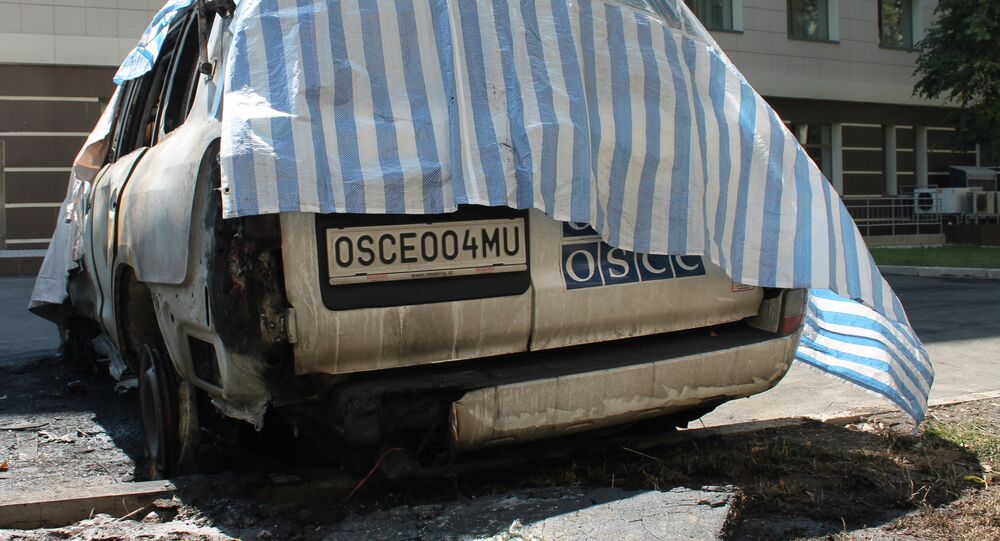 Chief Monitor of the OSCE Special Monitoring Mission called on all sides of the conflict to abide by the Minsk agreements.

MOSCOW (Sputnik) — The work of the Organization for Security and Co-operation in Europe's monitoring mission in eastern Ukraine is being obstructed on an unprecedented basis, Chief Monitor of the OSCE Special Monitoring Mission Ertugrul Apakan said Wednesday.

"Monitoring mission's work is being hampered on an unprecedented basis," Apakan told reporters. "Our security is at risk, at great risk."

The chief monitor called on both sides of the conflict to redouble their efforts in order to reach a political solution to the conflict, stressing that the Minsk agreements are the only way to peace in the region.

Despite the peace deal reached by Kiev forces and Donbas militia in February in Minsk, the fighting in eastern Ukraine has recently intensified.

© AFP 2020 / DIMITAR DILKOFF
OSCE Mission in East Ukraine Working Against All Odds - Berlin
The Minsk peace accord stipulated an immediate ceasefire, heavy weapons withdrawal from the line of contact between the warring sides and granting Luhansk and Donetsk regions more autonomy, among the key provisions. However, both sides have repeatedly accused each other of violating the Minsk agreements.

The OSCE deployed its monitoring mission upon Kiev's request in 2014. The mission has been tasked with monitoring the situation in southeastern Ukraine.

Since its beginning in April 2014, the conflict has claimed more than 6,800 lives, according to UN estimates.