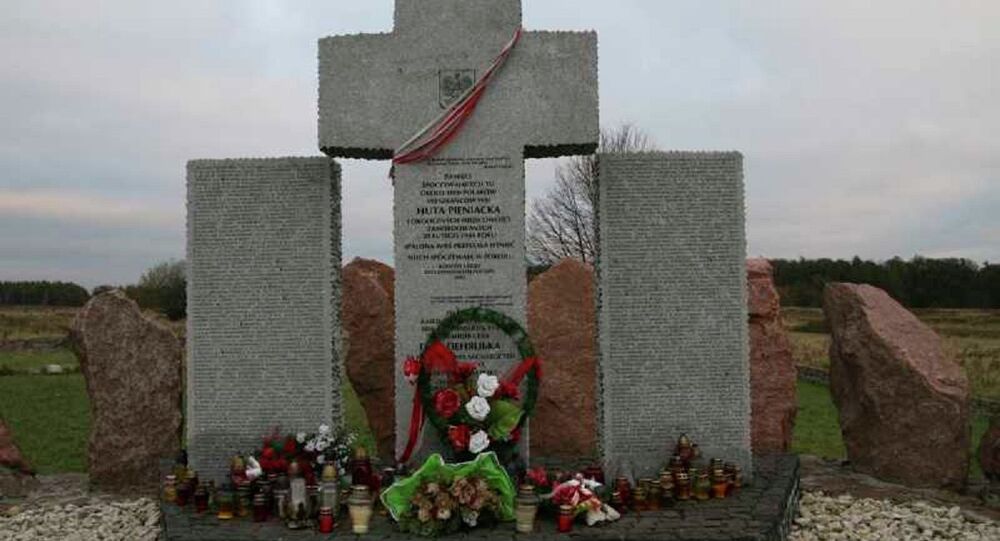 Polish parliamentarian Marek Poznański has organized and paid for a billboard on the Polish-Ukrainian border which will remind Ukrainians passing into Poland about the Volhynia Massacre, a genocidal campaign of ethnic cleansing carried out by Ukrainian fascist militias during the Second World War which resulted in the deaths of over 100,000 Poles.

"This is our common, difficult history, which many Ukrainians do not know about, but which is widely known about in Poland…It is a simple message. I want to remind both Poles and Ukrainians about these events," Poznański, an MP from the center-left party 'Your move' told local media, according to newspaper Lubelski Kurier.

© Sputnik / Vitaly Podvitsky
The Root of the Problem
The billboard, which includes white text on a black background, in both Polish and Ukrainian, features the words 'Volyn, 1943: They Call Not for Vengeance, But for Memory!"

The billboard, which Poznański said was his own personal initiative, is set to be installed near the heavily-used border crossing at Hrebenne-Rava-Ruska, located in Poland's southeast, near the western Ukrainian city of Lviv.

The massacre of Polish civilians in Volhynia and Eastern Galicia took place between 1943 and 1944, and was carried out by the fascist collaborationist Ukrainian Insurgent Army (UPA), with the peak of the massacres occurring between July and August 1943. Historians estimate that between 55,000 and 120,000 Poles, most of them women and children, were executed across hundreds of Polish settlements in the area, usually in a brutally shocking manner, with UPA militia burning down villages and using knives and axes rather than bullets to execute their victims. The massacre was in line with the ideology of the Stepan Bandera faction of the Organization of Ukrainian Nationalists (OUN), which outlined in its platform dating back to 1929 the need to brutally eliminate all non-Ukrainians from the future Ukrainian state.

© REUTERS / Gleb Garanich
Ukrainian Neo-Nazis Gone Out of Control: Poland Fears Violent Spillover
Polish historians have since described the events as genocidal, while Ukrainian authorities, especially those which came to power following the Maidan coup of February 2014, have lionized Bandera and UPA as heroes and fighters for independence. In 2003, prior to the first Orange Revolution of late 2004, which also played up Bandera as a hero, Ukraine's parliament recognized OUN-UPA's responsibility for the massacres. In 2013, the Polish parliament officially recognized the massacre as ethnic cleansing with signs of genocide, and condemned the OUN-UPA's actions.
...
Reddit
Google+
Blogger
Pinterest
StumbleUpon
Telegram
WhatsApp
183