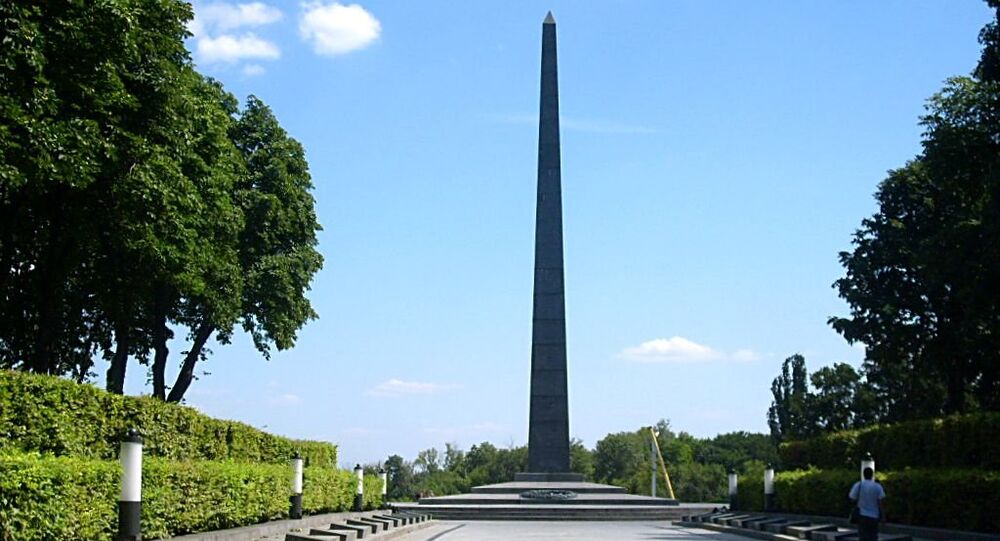 Ukrainian WWII veterans were outraged over authorities' decision to modify a monument in Kiev's Eternal Glory Park, replacing the dates '1941-1945' with the saying 'Glory to Ukraine! Glory to Heroes!', a phrase used by Ukrainian fascist collaborators during the Second World War.

© Sputnik / Alexander Mazurkevich
Hiding Dark Past: West Keeps Silent on Ukraine Forging Nationalist Identity
The scandal, which also revolves around a decision to bury a soldier who perished in the ongoing civil war in the east of the country at the foot of the monument, in time for Independence Day celebrations next week, has resulted in protests among social activists, while historians have warned that the planned changes are both premature and unlawful, Ukrainian news site Vesti has explained.

Dmitri Gurin, a volunteer for project 'KievArhitektura', sounded the alarm over the project earlier this week, revealing that Ukrainian authorities were preparing to entomb an unknown serviceman from the war in the Donbass along with the remains of an unknown soldier from the Second World War era. Moreover, slabs are set to appear on either side of the Eternal Flame, with the inscriptions 'Hero of the Second World War' (rather than the 'Great Patriotic War' veterans are accustomed to) and 'Hero of the Anti-Terrorist Operation' (Kiev's nomenclature for its civil war in the east).

"This is simply an unbelievable case –rarely in my life have I encountered anything like it," Gurin exclaimed. The activist noted that authorities "have made a decision to bury a soldier directly under the Eternal Glory Monument. Ultimately, this story of global importance will be buried under two ugly granite slabs, unnoticed by the civilized world, while those who do notice it will consider it a barbarous act. No competition was held; there were no projects, discussions, consultations or assessments [with experts]."

© Sputnik / Vitaly Podvitsky
The Root of the Problem
Ukraine's Ministry of Culture would not comment on the plans to change the face of the Eternal Glory Monument, including the addition of the Bandera-era slogan 'Glory to Ukraine! Glory to Heroes!', used by the Ukrainian Insurgent Army during its war against the Red Army during the Second World War. As the ministry explained, these are questions under the purview of the Ministry of Defense and the Presidential Administration.

Meanwhile, the press service of the local administration of Kiev's Pechersk district confirmed that "at 11 am on August 23 on the territory of Park of Eternal Glory, the remains of soldiers killed in the course of the Antiterrorist Operation will be buried, and soldiers from the Second World War era will be reburied." The presidential administration added only that the names of both soldiers are unknown.

The state-sponsored Institute of National Remembrance, known for its projects aiming at memorializing fascist wartime collaborators and to ban Soviet symbols in Ukraine, noted that "this burial will be a symbol of the fact that we know how to honor the memory of Ukraine's defenders –of everyone who died for Ukraine in uniform, from the era of the Ukrainian People's Republic, to the Red Army, to the Ukrainian Insurgent Army, to the present."

© Sputnik / Pyotr Zadorozhnyi
Streamlining History: Ukrainian Memorial Project Presents USSR-Free Version of WWII
Kiev historian Mihail Kalnitskiy argued that any changes to the memorial are unlawful, telling Vesti that "in 2009, this memorial was recognized as a monument of national importance. This status was assigned by the Cabinet of Ministers. This means that the present idea violates the law, given that the monument cannot be changed. And that's not even mentioning that slipping a hero of the ATO alongside the unknown soldier is uncomfortable. Kiev is a big city. There are many places where a monument to the heroes of the ATO could be put up."

Even ex. Institute of National Remembrance director Igor Yukhnovsky suggested that the proposed changes to the monument were counterproductive, noting that "first the ATO must be ended, and then, having agreed with society, can a monument in memory of those killed in this war be created. Right now doing this is just not possible."

As for Kiev's surviving Second World War veterans, those who have heard about the idea consider it deeply insulting. "These are completely different wars; they have different causes and different consequences. What they are planning to do in the Park of Eternal Glory is akin to spitting into the souls of us veterans, of those who made it to Berlin," veteran Mikhail Semenovich told Vesti.

Social activists now plan to hold a meeting at Eternal Glory Park's Eternal Flame on Wednesday, where historians and architects plan to discuss the future of the monument.