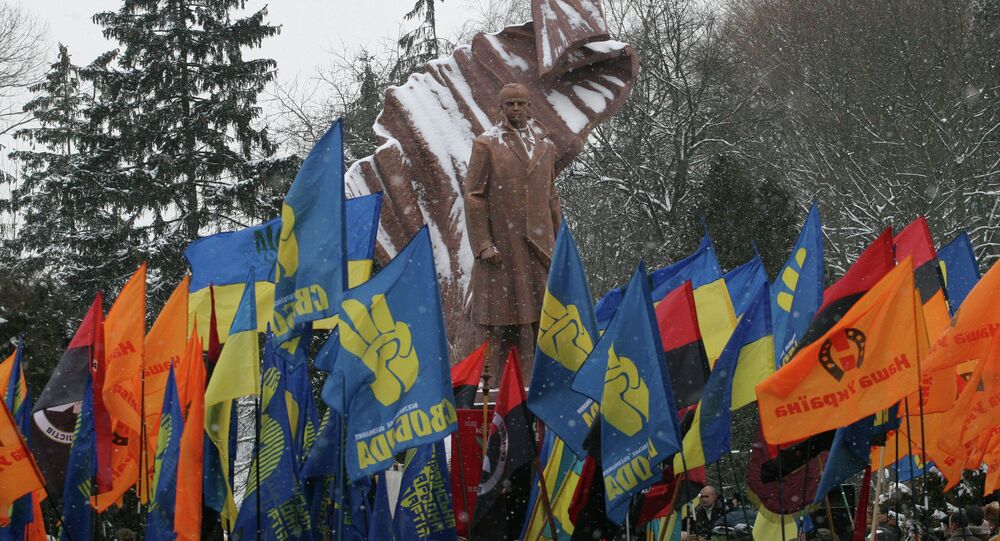 The West is largely unwilling to criticize the post-coup Kiev authorities for forging Ukraine's new identity by rewriting its complex and at times dark past. Whitewashing notorious ultranationalist organizations and turning the blind eye to their crimes is at the heart of this process.

"This form of 'support' is a disservice – to Ukraine and also to the West's public and decision-makers. It is alarming that some Western journalists, scholars, and policy-makers are embracing a nationalist version of Ukrainian history that resonates only with part of Ukrainian society and not at all with serious academic discourse in Europe and North America," Jared McBride argued.

© Sputnik / Vitaly Podvitsky
The Root Of The Problem

The expert on Russia, Ukraine and Eastern Europe in the 20th century named Volodymyr Viatrovych as the key man responsible for  producing a nationalist version of Ukrainian history. He refers to him as "a myth-maker-in-chief himself."

The former head of the archives of Ukraine's Secret Service (SBU), Viatrovych currently serves as the director of the Institute of National Memory (UINP). His record speaks for himself:

Viatrovych "helped in the effort to 'exonerate' a key World War II Ukrainian nationalist leader of any complicity in the Holocaust; presented the nationalist Ukrainian Insurgent Army as a democratic organization open to Jewish members; and focused heavily on Ukrainian victimization during the famine of the 1930s (while, interestingly, also blaming Jews as perpetrators)," McBride detailed in an article titled "How Ukraine's New Memory Commissar Is Controlling the Nation's Past."

In Viatrovych's distorted and disturbing worldview, Ukrainian nationalists and members of two infamous organizations – the Ukrainian Insurgent Army (UPA) and the Organization of Ukrainian Nationalists (OUN) – in particular are not responsible for the atrocities they are known to have committed, McBride explained. Those were either a necessity of war or a product of Soviet propaganda.

© Sputnik / Stringer
Endless War: US Training New 'Monsters' in Ukraine
A quick reminder: the UPA was established as the armed wing of the Ukrainian nationalists in 1942. It operated mainly in western Ukraine, fighting against Soviet forces on the side of Nazi Germany. In 1943, the UPA massacred as many as 100,000 Polish civilians in Volhynia and Eastern Galicia.

These war crimes are well documented. But Viatrovych does not let historical evidence stand in the way of glorifying the record of Ukrainian nationalism, brushing aside documented war crimes as mere opinions of historians citing them.

"Viatrovych simply claims that documents are Soviet forgeries or that scholars challenging him are serving sinister propaganda purposes," McBride stated.

"Radical right-wing Ukrainian nationalists are depicted as nothing but tragic freedom fighters, occasionally forced to don Nazi uniforms to struggle for independence, liberty and Western values. This is the party line at the center, one largely shaped by Viatrovych," the expert pointed out.

The UINP director is behind some of Kiev's most controversial legislative initiatives, including a series of laws outlawing communism and a bill recognizing anyone who fought for Ukraine's independence from 1917 until 1991 as a freedom fighter.

"In reality, these laws regulate how history should be written and place restrictions on free speech, and thus are deeply at odds with Kiev's claims to Western values," McBride noted.