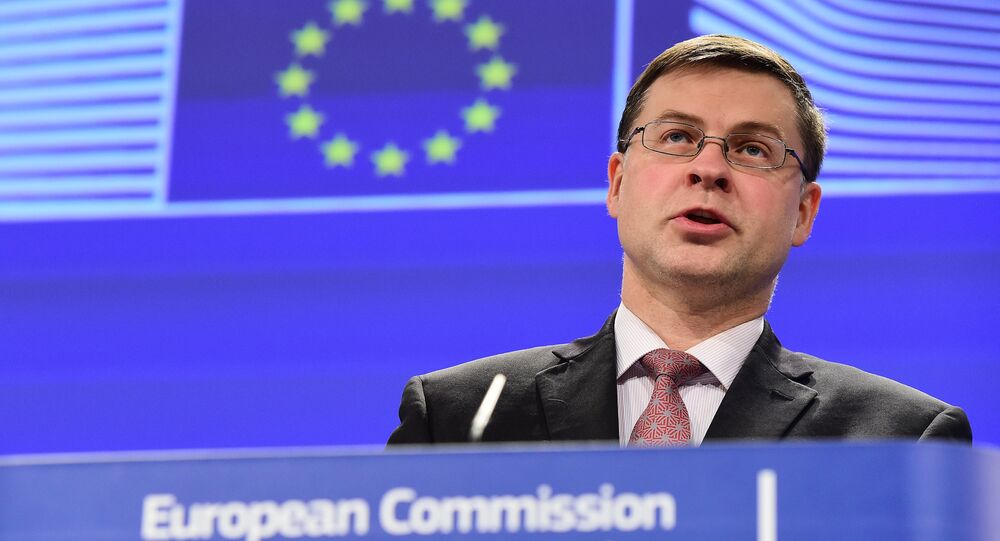 Valdis Dombrovskis says the European Commission predicts that Greece’s GDP will go down by 2.3 percent this year as a result of the uncertain financial situation of the past half a year.

BRUSSELS (Sputnik) – The European Commission predicts that Greece’s GDP will go down by 2.3 percent this year as a result of the uncertain financial situation of the past half a year, the commission’s vice president Valdis Dombrovskis said.

Dombrovskis was speaking on Friday after a Eurogroup meeting that approved an €86 billion ($93 billion) bailout package aimed at rebuilding Greece's economy.

"We believe that today’s agreement is essential to lift the uncertainty which has been hanging over Greece during the last half year and to regain confidence," the Vice-President of the European Commission said.

According to Dombrovskis, Greece’s GDP will go down by 2.3 percent, in contrast to the winter economic prognosis, which predicted 2.5 percent growth.

Meanwhile the Eurogroup said in a Friday statement that "Greece will target a medium-term primary surplus of 3.5% of GDP with a fiscal path of primary balances of —0.25% in 2015, 0.5% in 2016, 1.75% in 2017 and 3.5% in 2018 to be achieved notably through upfront parametric fiscal reforms supported by measures to strengthen tax compliance and fight tax evasion."

Eurogroup President Jeroen Dijsselbloem told reporters that the new deal and the legislative steps taken by Greece will help in "rebuilding trust" between Greece and its lenders.

"Sustainability can be achieved through a far-reaching credible reform program and debt-related measures without nominal haircuts," Dijsselbloem said after the Friday Eurogroup meeting.

The Eurogroup president stressed that the Greek economy will return to sustainable growth if the new reforms agreed to by the Greek government are "implemented with determination."

© AFP 2021 / THIERRY CHARLIER
IMF Chief Welcomes EU Assistance to Greece, Urges Significant Debt Relief
Under the new aid package, Greece will receive the first tranche of 26 billion euros in two payments. The first sub-tranche of 10 billion will be made available immediately, while the second sub-tranche of 16 billion euros will be disbursed to Greece in several installments, starting with a first disbursement of 13 billion euros by August 20, which is when Greece is due to make a €3.4 billion ($3.8 billion) repayment to the European Central Bank (ECB), one of its major international money lenders.

Klaus Regling, Managing Director of the European Stability Mechanism (ESM), the Eurozone bailout fund, told reporters after the Friday Eurozone meeting that the he did not expect the ESM to provide all the funds under the new package.

"We expect that the IMF [International Monetary Fund] will eventually come in," Regling said, adding that the exact amount of money that the lender will provide to Greece is currently undetermined.

The ESM managing director added that the amount of aid that Greece will require might be reduced through privatization.