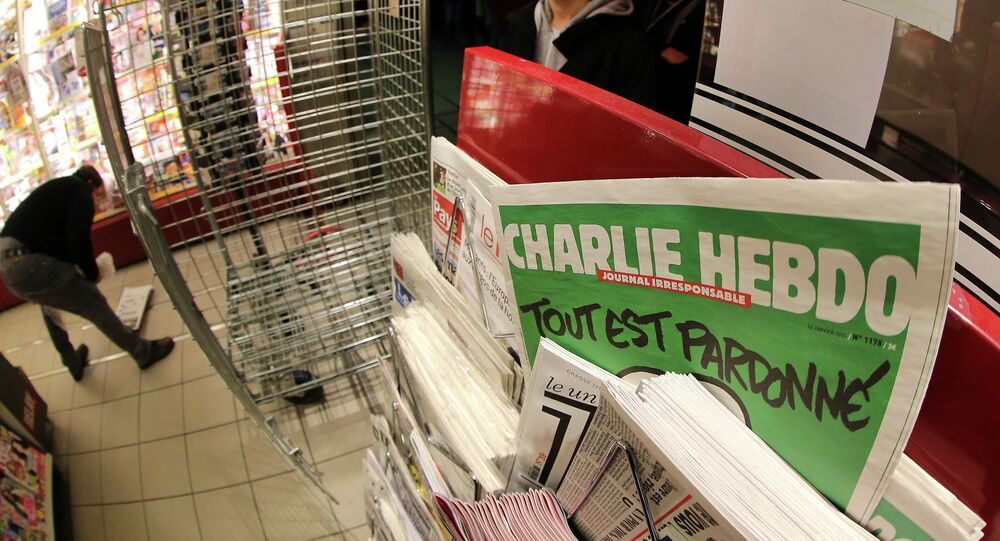 The French satirical magazine Charlie Hebdo has been taking angry flak again, this time for a scandalous cover mocking the discovery of plane wreckage on Reunion Island from missing Malaysia Airlines flight MH370.

Shown on the cover of this week’s issue is a pair of hands groping what appear to be breasts. Above the image is written what translates as: "We've found a bit of the pilot and the stewardess."

© AP Photo / Rob Griffith
Most Maldives Debris Not Part of MH370 Missing Flight
The cover has drawn angry criticism from the relatives of the vanished passengers and crew of the Malaysian Airlines flight MH370.

The eldest child of the plane’s chief steward Andrew Nari could hardly contain her grief over a distasteful caricature of the wrecked aircraft depicted in French magazine Charlie Hebdo, The Malaysia Insider reported on Thursday.

Maira Elizabeth, 18, who is pursuing a diploma in mass communication at SEGi College in Subang Jaya described the satirical magazine as "dim-witted and repellent" over its disgraceful display of the caricature.

"This is unethical of the magazine and disgusting it as it  [caricature] humiliates everyone and everything. I cannot believe that such a company or people (behind the magazine) still exist!" she said during an interview earlier this week.

© AP Photo / Lai Seng Sin
France to Send Air Mission to Reunion Island to Look for More MH370 Debris
The cover is the latest in a series of cartoons from the publication over the past year to have sparked outrage, including depictions of the Prophet Muhammad, Nigerian terror victims and Pope Francis, The International Business Times reported on Friday.

The missing airliner went off-route March 8, 2014, and prompted a massive search. There were reports of debris sightings immediately after the plane went missing, but the wreckage found on Reunion Island has turned out to be the first authentic traces of the plane.

Charlie Hebdo’s Paris headquarters was the site of a deadly attack earlier this year by extremists who took issue with the magazine's satirical depictions of the Islamic prophet Muhammad.