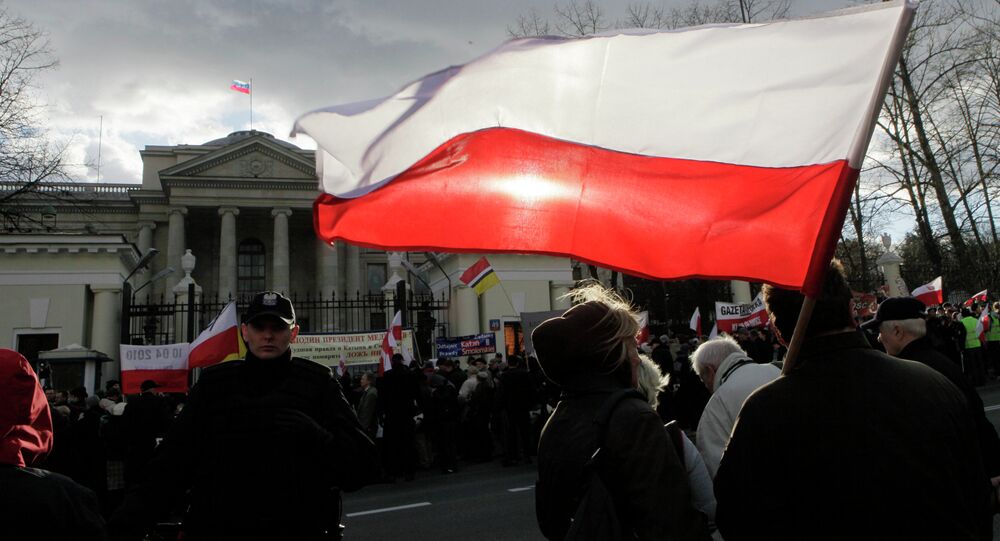 Commenting on the results of global polling by the Pew Research Center, which found Poland to be the most Russophobic nation in the world, Polish news site Wirtualna Polska attempted to offer an explanation.

© Flickr / sualk61
Poland Needs World Class Media, Not 'Festival of Lies and Russophobia'
In an article for online newspaper Wirtualna Polska entitled 'Why Do Poles Hate Russians More Than Anybody?', columnist Amanda Siwek recalled Pew's findings, which showed that 80 percent of Poles have an antagonistic view of Russia, compared with just 15 percent "who continue to treat our eastern neighbor with sympathy."

For her part, the Siwek attributed growing Russophobia among Poles to the heightening of geopolitical tensions between the two countries. The journalist cited the findings of the Polish Center for Public Opinion Research (CBOS), which noted that back in 1993, 'only' 56 percent of Poles had a negative view of Russia.

Siwek added that these figures have remained relatively consistent over the decades, before worsening dramatically in the past year or so. Siwek suggested that Russia's 'aggression' in the Ukraine crisis, together with Poles' "fears of being attacked by Russia" were the root causes of the uptick in Poles' animosity toward Russia.

Digging into the historical roots of Polish animosity toward Russia, Siwek cited Professor Henryk Domański of the Polish Academy of Sciences, who explained that Polish hostility toward Russia is partly the result of "the history [between the two countries] –of all those defeats and misfortunes which Russia had caused us over the course of many centuries. Under Russian rule, we struggled with economic backwardness for many years. Poles remember this perfectly well, and have carried this attitude of Russia being at fault over the course of many years."

Moreover, Domański explained that "Poles continue to believe that our neighbor is on another, lower cultural level."

Poles' Hate for Putin Rubs Off on Russia

© Wikipedia / Adamon
'Kind Trolls' and Other Weapons in Poland's Information War With Russia
Noting that Poles' antagonism toward Putin is even higher than it is toward Russia, with the Russian president sitting at an 87 percent 'no confidence' rating, Siwek went on to cite University of Warsaw Institute of International Relations Professor Maciej Raś, who noted that "Poland is now indeed gripped by anti-Putin sentiment."

Raś suggested that Poles "negative attitudes to Putin are carried over to a negative attitude toward the [Russian] state and, to a lesser extent, toward the Russian population. This approach stems from the fact that Russian society largely supports Putin's actions, particularly in the context of his rivalry with the West. If Russians had treated him critically or at least neutrally, the sentiment of the Poles [toward Russians] would have been different."

Raś noted that Poles dislike Putin for several reasons. "First and foremost, it is because he has turned Russia on a course that is very different from the Western model of development, both internally and in international politics. We are talking here about the ubiquitous corruption of Russia's economic model. Moreover, Putin has made it clear that Russia will implement its own interests, even if it is in spite of the West, including Poland."

© AP Photo / Czarek Sokolowski
Poland Not In Danger, More NATO Presence Needless - Lawmaker
Ultimately, Raś told Wirtualna Polska that "in the past as well, Poles have had a negative opinion toward the leaders of Russia and the USSR. This was so under the tsars, under the Soviet general secretaries, and has remained so under Putin."

In the final analysis, in contrast to the 1990s and 2000s, when Polish politicians and society seemed to be somewhat ashamed of being labeled Europe's last Russophobes, today the country's media and political environment seemed determined not only to show pride in that status, but even to export it abroad, within the European Union and even to Russia itself.

Polish Academic Asks: When Does Being Anti-Russian Become Simply Racist?