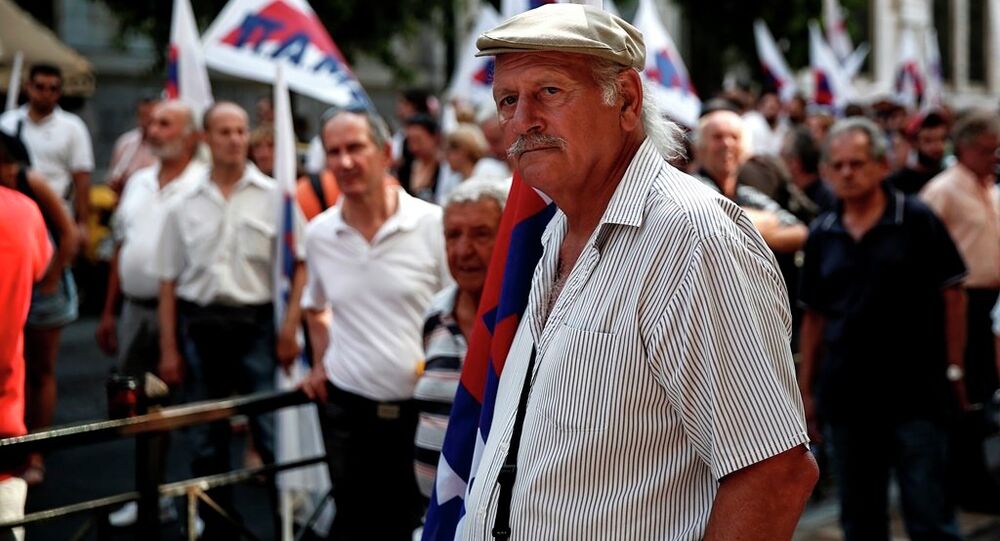 Critics have slammed Greece’s new bailout deal - agreed upon between Athens and the country’s creditors - saying that it is a declaration of war on the Greek people, as Prime Minister Alexis Tsipras recalled parliament for an emergency session to try and ratify the agreement.

As Tsipras tries to gain the support of MPs to pass the $96 billion (€86 billion) reforms package, critics have savaged the deal, saying that it essentially puts Greece "up for sale".

Nick Dearden, director of UK-based advocacy group Global Justice Now, released a statement to Sputnik saying that the bailout agreement would turn Greece into a “corporate paradise," with locals to ultimately lose out.

"Greece is up for sale, and its workers, farmers and small businesses will have to be cleared out of the way.

"The purpose of the bailout has little to do with 'repaying debt' and everything to do with creating a corporate paradise in the Mediterranean. The debts that matter to Europe’s elite have already been repaid. Today, debt has simply become a straightjacket to discipline Greek society. The real purpose of the program is economic restructuring, through privatization and deregulation."

He added that reforms aimed to increase the privatization of publicly owned assets would lead to corporations "scrambling to get a piece of the action".

"The package declares war on all who stand to lose: workers, small businesses and farmers. Gone will be laws protecting small business ownership, collective bargaining, the minimum wage, and help for farmers. The reforms are so specific that the EU is writing regulation on bread measurement and milk expiry dates."

Deal Not Yet Over the Line

Many leading economists have raised concerns that Greece’s bailout agreement, which will see the continuation of harsh austerity policies, won’t solve the country’s crippling debt problems.

And while Greek officials have struck a deal with the country’s creditors over the three-year debt-for-reforms package, the measures need to be approved by Greek parliament, as well as the parliaments of the other Eurozone countries.

While Alexis Tsipras’ is facing a rebellion from many within his own Syriza party politicians, vehemently opposed to further austerity, is it thought that he will use the support of opposition parties to pass the measures.

#ThisIsACoup #Greece is proof #Troika & global banks keep countries under blackmail All countries need to restore control of our currencies.

However, there is concern that even if the deal passes in Athens, it may face some opposition in German parliament, with Berlin stressing that it would want to work through the fine print of the deal, rather than rushing into a new deal.

Many German MPs have been highly critical of the decision to offer Greece a new bailout deal, with some proposing that the country should be either expelled, or given a temporary exit from the Eurozone.

In return for the financial aid, Greece would need to implement a number of structural reforms aimed at making the country’s economy more efficient.