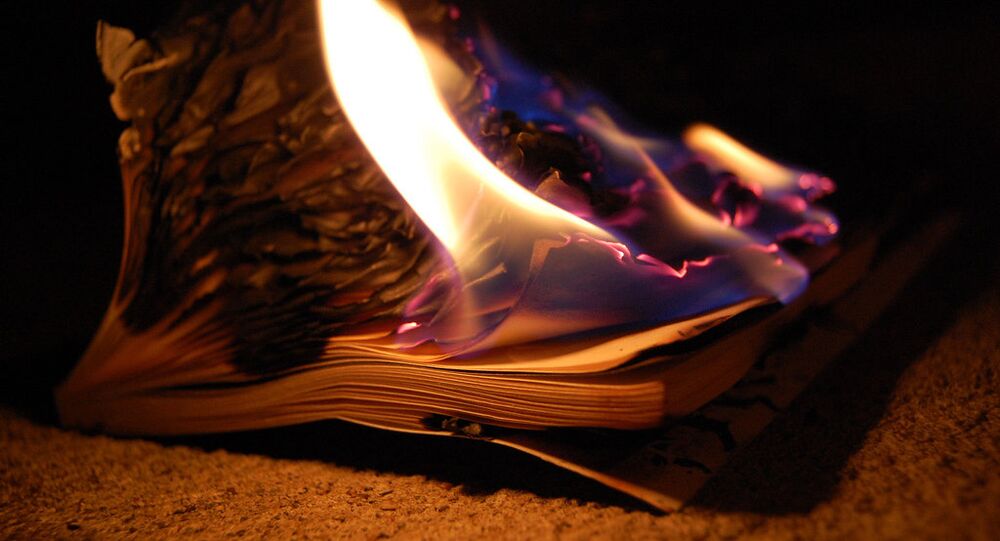 Goskomteleradio, the State Committee of Television and Radio of Ukraine, has issued a ban on 38 books by Russian authors, prohibiting their import onto Ukrainian territory, the press service of the agency has declared.

© Flickr / Televisione Streaming
Madness Ukrainian Style, Depardieu Movies Banned - German Media
Goskomteleradio deputy head Bogdan Chervak did his best to explain the decision, stating that it was "dictated by the need to prevent the Russian Federation from using methods of information warfare and disinformation against the citizens of Ukraine to spread the ideologies of hate, fascism, xenophobia and separatism."

The ban also targets books in the areas of political science and social science by conservative Russian publicist Alexander Dugin, radical political dissident Eduard Limonov, Russian academic and presidential advisor Sergei Glazyev, and renowned Russian economist Valentin Katasonov. Most of the banned books are related in one way or another to Ukraine; many of them were published over the past two years in the midst of the Ukrainian crisis.

Goskomteleradio warned that the list of banned Russian books is likely to be expanded, saying that it would cite Article 28 of Ukraine's Publishing Act, which prohibits the distribution of published works which can be used to threaten Ukraine's independence, change the constitutional order by force, or violate the sovereignty and territorial integrity of the state.

© Sputnik / Artem Kreminsky
Crimea Issue Needs Unbiased Media Coverage - Former Diplomat
The agency launched its initiative early last month, referring to the country's State Fiscal Service with a request to include Russian books in the list of goods prohibited from import onto Ukrainian territory from Russia.

Authorities did not clarify what would happen to those who violated the ban on the import of the banned literature, but noted that the books themselves would be confiscated and destroyed.

Russian authors and social scientists have begun reacting to the ban. Russian pop historian Nikolai Starikov, whose book "Ukraine: Chaos and Revolution: The Weapon of the Dollar" made the list of banned books, argued that Kiev's move is an attempt to hide some basic truths. Starikov emphasized that his book had "neither hate, nor a call to separatism, nor fascist ideas –[in other words] none of the things listed by Ukrainian authorities," adding that by banning his work, Ukrainian authorities were trying to hide a simply truth, that "Ukraine has witnessed an unconstitutional seizure of power…[and] come under the external control of the US."

Popular Russian radio journalist Sergei Dorenko, one of whose books also made the list, noted that "in the age of the internet, it's simply funny for the Ukrainians to try and ban something." Dorenko referred to the fact that since the appearance of the internet in countries like Ukraine and Russia, books have often been made available on the internet, for free, even before being published and released in bookstores. With the appearance of e-readers and tablets, the trend has become so pervasive that many authors, especially academics, have deliberately released their works online, for free, in order to get a wider readership. In such a situation, it's questionable how much effect, if any, a ban on physical copies of books will actually have.

© Flickr / Vladimir Dimitroff
Off Air: Ukrainian MP Calls to Smash Satellite Dishes Carrying Russian TV
The latest ban on Russian media is part of a growing trend. Over the past year, Ukraine has created and diligently expanded its list of banned Russian media, prohibiting nearly 400 Russian films and television series, issuing a blacklist for Russian artists said to be 'threatening Ukraine's national security', and banning the broadcast of over a dozen Russian television channels on Ukrainian territory for their alleged contravention of Ukrainian legislation. With the prevalence of internet and satellite television technology, experts doubt the practical effectiveness of Kiev's initiatives.
...
Reddit
Google+
Blogger
Pinterest
StumbleUpon
Telegram
WhatsApp
225