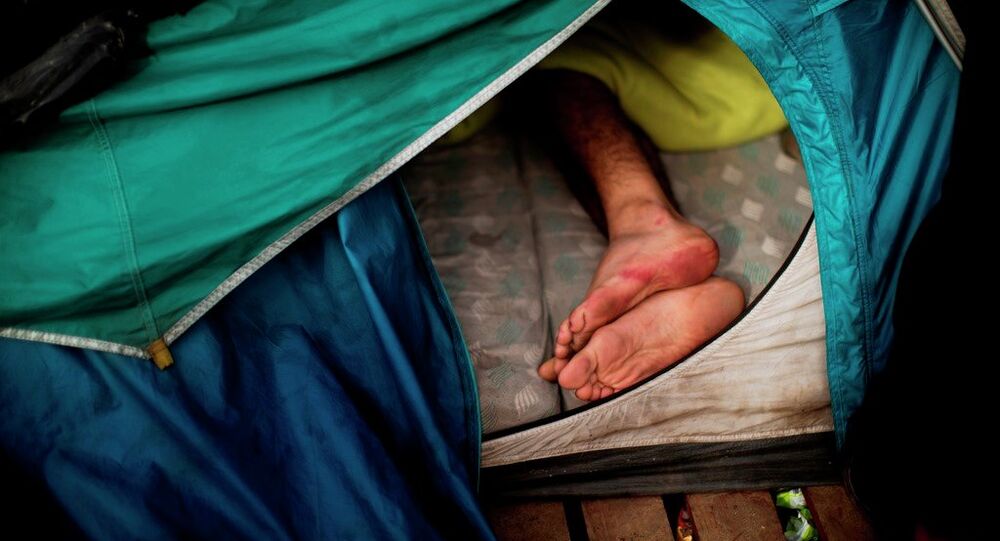 Reports of an African man scaling four security fences, dodging surveillance cameras and ducking into doorways as trains sped by at 100 mph to make a 31 mile journey to Britain encapsulate the desperation of migrants to reach the UK and highlight the deteriorating situation in Calais.

Ministers in Britain are considering the legalities of shutting the Channel Tunnel at night after it emerged the Sudanese man walked almost its entire length before being arrested in Folkstone, Kent.

According to The Telegraph, ministers have sought legal advice to close the tunnel to freight and passenger trains overnight amid concerns that services after dark increase the risk of migrants making it through the tunnel.

© AP Photo / Emilio Morenatti
A migrant runs after crossing a fence as he attempts to access the Channel Tunnel, in Calais, northern France, Monday, Aug. 3, 2015.

Thousands of migrants have attempted to breach security fences in Calais and reach the Channel Tunnel. Nine have been killed since June – but the case of Abdul Rahman Haroun, who has been charged with one count of trespassing on a railway line, is the worst security breach to date.

I have just spoken to @fhollande about Calais. I welcomed French efforts and we agreed to keep working together to tackle illegal migration.

The migration issue continues to make headlines across Europe but with little put forward in way of a solution. In another mass drowning in the Mediterranean Sea, when a packed fishing boat capsized near the Libyan coast, 25 bodies were recovered and 400 people rescued.

But there are fears many more of the migrants on board were trapped in the ship's hull, their fate lying at the bottom of the sea.

"The shame of #Europe is at the bottom of the sea"- Paula Ferias, from #MSFSea pic.twitter.com/yxeIIuU3fQ

And the numbers speak for themselves: 1,170 migrants drowned in April 2015, 500 died in September in 2014 and 368 perished in October 2013, according to the International Organization for Migration.

Those lucky enough to be rescued are repatriated to Italy, Greece and Spain. So far this year, Italy has received 96,971, Greece 88,695 and Spain has received 1,674 migrants.

And yet European Union Members of Parliament cannot agree on a quota system for processing the asylum claims, as proposed by President of the European Commission Jean Claude Juncker and prompting outrage in Sicilian mayor Leoluca Orlando.

The mayor of Palermo said the European Union "should feel ashamed".

"We correctly recall the Holocaust, the Nazi mass murder of Jews…but this, too, is a genocide. And I think that one day, historians will look at this and want to charge the European Union with genocide."

So far, the response from EU member states is to build walls and reinforce fences. The Bulgarian government has erected a razor wire fence sealing off its border with Turkey.

Hungary has passed a law allowing a metal fence to be built on its border with Serbia and Britain’s response to the Calais crisis is to send more reinforcement fencing and sniffer dogs to combat the influx of migrants attempting to enter the UK through the Channel Tunnel.

© AFP 2020 / Csaba Segesvari
A picture is taken on July 18, 2015 shows soldiers of the Hungarian Army's technical unit finish the first completed elements of the 150 meter-long metal fence at the Hungarian-Serbian border nearby Morahalom village.

Responding to the British reaction to the crisis in Calais, Mayor of Palermo Leoluca Orlando quips:

"Now we have the Calais problem. So Prime Minister David Cameron has discovered that there is a migrant problem, has he? We can now say that Africa begins at Dover, can’t we?"

UKIP Leader's Message to Illegal Migrants: You Shall Not Pass