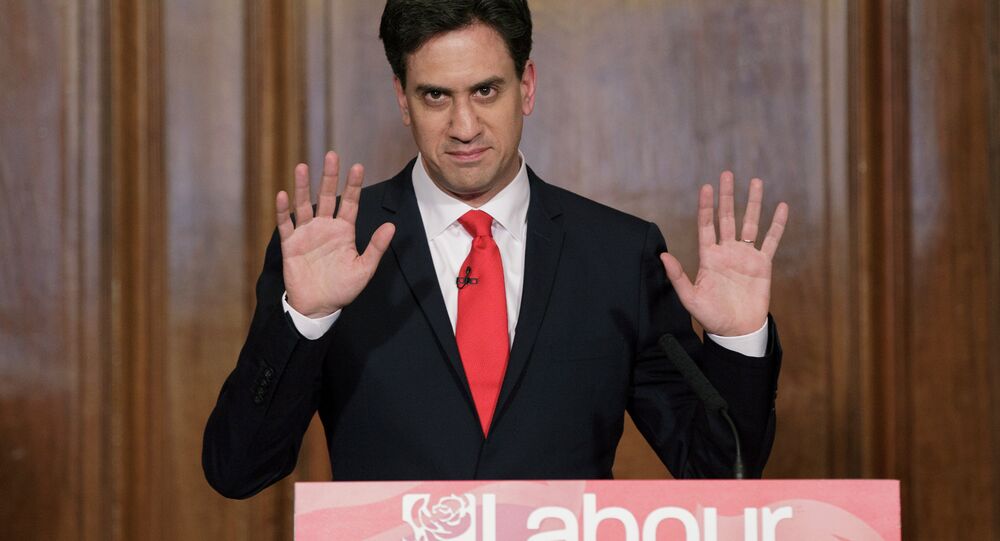 The UK Labour Party ignored the electorate's views on issues of public concern, such as immigration and the economy, according to polls conducted after Ed Milliband's victory in the 2010 party leadership election, The Guardian reported Wednesday, citing leaked comments made by the party's former chief pollster.

© AP Photo / Emilio Morenatti
No 'Milk and Honey' Here - UK Talk on Immigration Leaves a Sour Taste
MOSCOW (Sputnik) – The leaking of the memo was motivated by some Labour members' fears that the party would ignore the same message again in the 2015 party leader election, the paper said.

"Labour is seen as having consistently ignored English people’s views on immigration. This is not just an issue for lost working-class voters – it was central to Middle England and a major concern for Lib Dems," James Morris, who served as chief pollster both for Ed Miliband personally and for the party at that time, was quoted by The Guardian as saying.

2010 Labour polls suggested that the party leadership should change its position on the issues of migration, social benefits and the economy.

"There were three very clear threshold issues [after 2010 election] where the party needs to show a new approach: immigration, benefits and the deficit/economy," Morris's memo reads.

According to Morris, public opinions about immigration were related to perceived competition with migrants for work, the issue of benefits for migrants, as well as doubts as to whether they could be assimilated into general society.

The issue of benefits, partly connected to the immigration issue, was also identified as a matter of great public concern. Focus groups revealed a prevailing opinion that Labour had created a system in which some people had to work hard to earn money, while others did not have to work at all, being effectively better off living on benefits.

Morris stressed that the key issue for a new Labour leader in 2010 was to change of party's economics policy, as there was an opinion that "Labour spending helped create the economic mess we are in."

The 2015 Labour Party leadership election will be held between August 14 and September 10, with the results to be announced on September 12.

Immigration Problem in UK to Worsen Despite Cameron's Promise