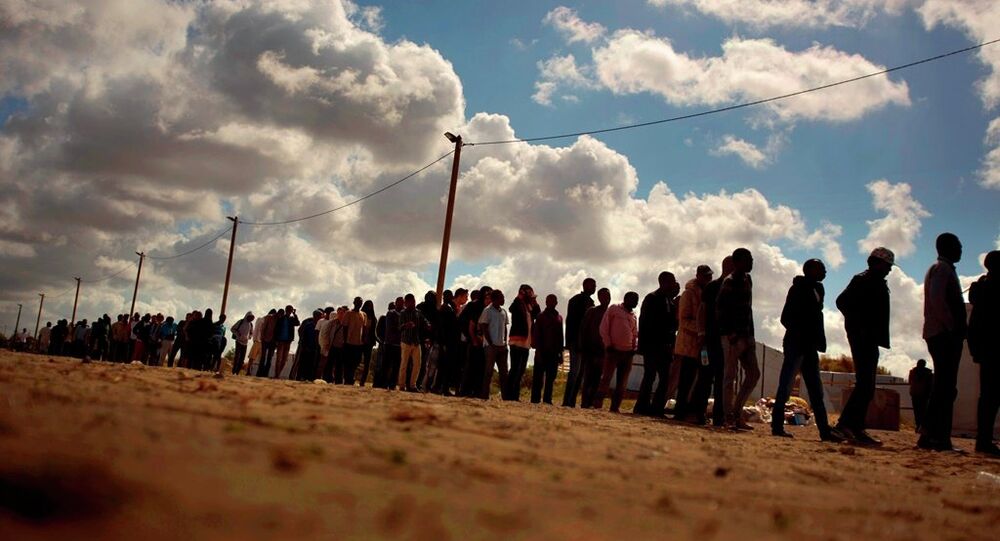 "Swarming" to the land of "milk and honey" where the streets "are not paved with gold" - as the migrant crisis in the Mediterranean and on the French border of Calais continues, the British government is adopting an increasingly aggressive rhetoric on immigration policies.

The Home Office is planning to strip failed asylum seekers of financial support — $58.68 (£36.95) a week in supermarket vouchers — while the Home Secretary responds to the crisis in Calais by saying the streets in Britain "are not paved with gold."

In a joint article with Bernard Cazeneuve, France's Minister of the Interior, Theresa May said:

"Ultimately, the long term-answer to this problem lies in reducing the number of migrants who are crossing into Europe from Africa."

"Many see Europe, and particularly Britain, as somewhere that offers the prospect of financial gain. This is not the case — our streets are not paved with gold," according to the article published in The Telegraph.

And adding to the somewhat biblical 'swarm' reference, Immigration Minister James Brokenshire defended Home Office plans to strip asylum seekers of their benefits by saying: "What we are looking at now is family groups which continue to maintain that automatically, against a backdrop of people trying to present the UK as somehow the land of milk and honey and that somehow if you get here you automatically are entitled to welfare."

In light of the PM's comments yesterday, sharing this again. Which countries in Europe get the most asylum seekers? pic.twitter.com/G8XAHA7DkJ

The milk and honey that James Brokenshire is referring to is the current allowance of $58.68 (£36.95) a week allocated to asylum seekers who have had their application for refugee status refused and are awaiting deportation. Some live in local authority accommodation, some are detained in immigration removal centers like Yarl's Wood.

An asylum seeker is someone who has often fled war, torture, sexual violence in their own country to seek safety elsewhere. According to an official Home Office consultation paper, thousands of asylum seekers who have had their claim for refugee status rejected and who have exhausted every right to appeal could have their state welfare support removed.

As of 10th August 2015, all destitute asylum seekers awaiting a decision on their claim, whether they have children or not, will now receive the same weekly allowance of $57.68 (£36.95) per person. The Home Office has decided that payments paid at the level of $11.71 (£7.50) a day to asylum seeking families with children meant they were "receiving significantly more cash that is necessary to meet their essential living needs."

Asylum seekers do not have the right to work in the UK and the government's intention is to send out a message that "Britain is not a soft touch on asylum," in the hope it will deter the thousands of migrants who attempt to cross the Mediterranean or the English Channel.

"We have grave concerns about the Government's proposals to remove support from some of the most vulnerable families in the UK, many of whom fear there is real risk of serious harm or persecution to them and their children if returned to their country of origin."

Responding to the Immigration Minister's "no soft touch" rhetoric, Doyle adds: "This harsh proposal seems to be based on the flawed logic that making families destitute will coerce them into going home. The Government has a duty to protect all children in this country and previous Governments have recognized it morally reprehensible to take support away from families with children."

Around 3,000 migrants from Ethiopia, Eritrea, Sudan and Afghanistan are living in a makeshift camp in Calais. Attempts to enter the Eurotunnel terminal peaked at 2,000 recently. Meanwhile, more than 1,750 migrants have died in the Mediterranean since the start of 2015 — 30 times higher than in 2014.

Undocumented Migrants in UK to Be Abruptly Evicted From Rented Properties