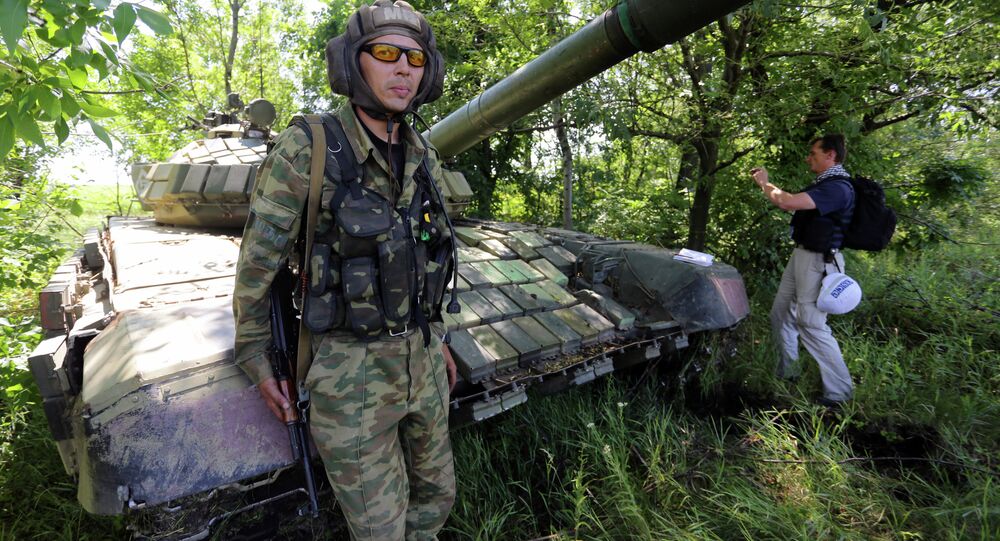 An unidentified man in the self-proclaimed Donetsk People's Republic told OSCE that he serves in a nonexistent unit of the Russian armed forces.

© AFP 2020 / Dimitar Dilkoff
OSCE to Continue Work in Eastern Ukraine Despite Shelling
A new report from the OSCE monitoring mission in Ukraine's Donbass says that a man at a DPR weapons site claimed to be from the "16th airborne brigade" from Russia's Orenburg.

"An armed man guarding the facility at one of the sites claimed that he and those present at the site were part of the 16th airborne brigade from Orenburg, Russian Federation. They did not wear identifying insignia," the OSCE report said.

The OSCE, which strives to monitor the conflict impartially, noted down the man's statement in the monitoring mission report.

"The reliability of these statements must be checked," the Kremlin's spokesman Dmitry Peskov said in response to a question on the issue.

The unidentified man's claim has been circulated in Ukrainian media as an argument for the presence of Russian troops in Ukraine. Ukrainian President Petro Poroshenko has previously claimed that over 9,000 Russian troops are present in Ukraine, although he did not specify how they had been identified.

OSCE to Continue Work in Eastern Ukraine Despite Shelling