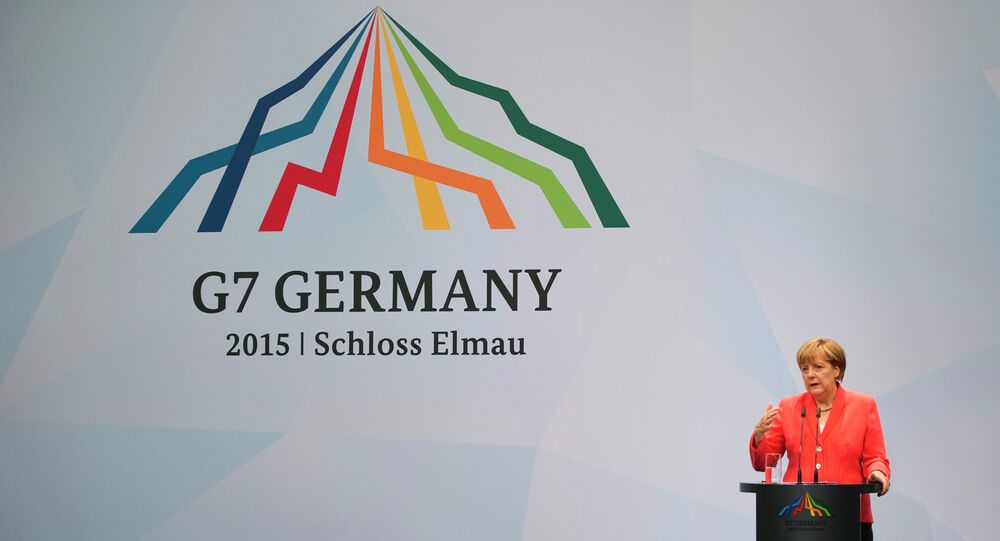 Germany paid about 80 thousand euros for the logo of the G7 summit in Bavaria. The money was allocated from the country’s federal budget.

Germany had to pay nearly 80 thousand euros to create the logo for the G7 summit in Bavaria, Deputy Government Spokesperson Christiane Wirtz told reporters in Berlin on Wednesday.

At the same time, she added that the logo was used not only for the summit in Bavaria, but also throughout the whole year when Germany held its presidency in the international group.

"It was used at ministerial meetings and many other events," she said. The logo was also placed on all informational materials, souvenirs and other products.

© REUTERS / Michael Kappeler
G7 Spent All Their Time Talking About the Man They Didn't Invite to the Summit - Israeli Political Analyst
Until 2014, the group was known as the G8, as it also included Russia.

Following Crimea's reunification with Russia and the escalation of the Ukrainian crisis in 2014, Moscow walked out of the group, as the West accused it of fueling the conflict in its neighboring country — a claim that the Kremlin has repeatedly denied.

The group currently includes Germany, the US, Canada, Japan, France, Britain and Italy. The leaders of these countries met in Bavaria on June 7-8 to discuss the extension of sanctions against Russia.