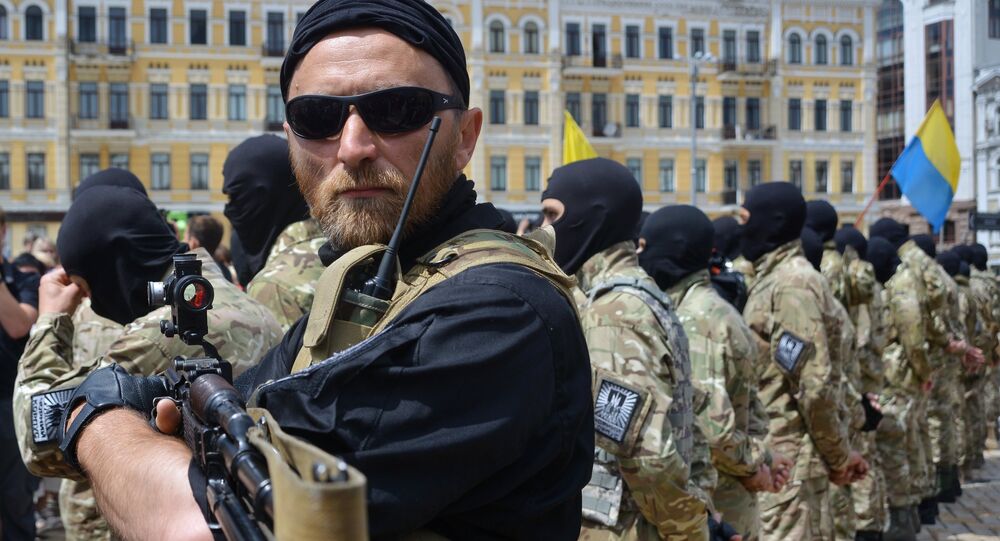 Czech MEP Jaromír Štětina has invited the commander of the Ukrainian volunteer Azov Battalion and Verhovna Rada deputy Andriy Biletsky to speak at the European Parliament.

© Sputnik / Alexander Maksimenko
Azov Fighter Could Face Polish Court for Nazi Salute at Death Camp
Štětina, who is blacklisted in Russia, argued that the volunteer battalions are a formidable military and political force and keeping them out of the loop would hamper the ongoing efforts to end the conflict in Donbass.

Štětina also said he knew his decision would invite a lot of flak from fellow EPs, but that he believed that the Azov commander should have a chance to explain his and his men’s standpoint.

Meanwhile, prominent Czech political scientist Jan Miklas told Sputnik he was not at all surprised by Mr. Štětina’s “escapade.”

“This was an unforgiveable thing to do, an open support for Nazis that must be condemned! Just take a look at Andriy Biletsky’s past and you will see that this man worked hand in hand with the  Ukrainian ultranationalists, real Nazis… Look at the symbol used by his Azov Battalion! I am not surprised that the decision to invite Biletsky comes from Jaromír Štětina, because he is the kind of man who always root for radicals of every hue, from neo-Nazis to Islamic fundamentalists… During the Nineties he defended the radical Islamists who were then fighting in Chechnya… In a word, if Europe, personified by the MEPs, agrees to listen to Biletsky’s “explanations”, then it will become a Nazi collaborator itself…”

“It is my firm conviction that the European Parliament is not a place for people like Biletsky,” Jan Miklas said in conclusion.

The Azov voluntary battalion is part of the Ukrainian National Guard.

On July 13, in the wake of the bloody standoff in Mukachevo, its members, along with those from Aidar, OUN and Tornado battalions, joined the Right Sector militants in their demands for the resignation of Ukrainian Interior Minister Arsen Avakov.