A member of the Ukrainian neo-Nazi Azov battalion may be prosecuted in Poland for a series of photos where he is seen demonstrating a Nazi salute against the backdrop of the Majdanek death camp outside Lublin. 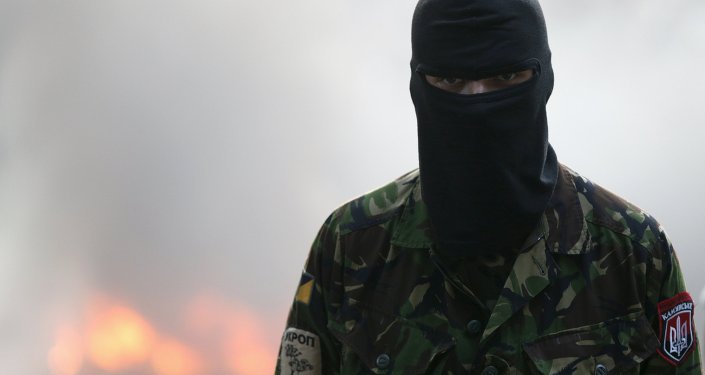 © REUTERS / Valentyn Ogirenko
Descending Into Chaos: Ukrainian Neo-Nazi Groups Go on a Rampage
As Polish journalist Tomasz Matejcik noted the Ukrainian neo-Nazi "will meet with the Polish court for the ‘interesting’ photos at a Nazi concentration camp Majdanek and Nazi propaganda.”

Earlier, Polish media reported that a member of the Azov battalion was shown on the images.

Matejcik also wrote that Polish media showed a strong dislike for members of the Ukrainian ultranationalist volunteer battalions who, after fighting independence supporters in Donbass, came to Poland to earn some money.

The journalist urged the Polish authorities to bring to justice the Azov fighter who “must be declared persona non grata for insulting the memory of Poles, Jews and other victims of Nazi oppression.”

Tomasz Matejcik had earlier found photos made by another Ukrainian, a student, which insulted the memory of those who perished at Maidanek.

The student was quickly expelled from the Polish college were he was studying and deported.