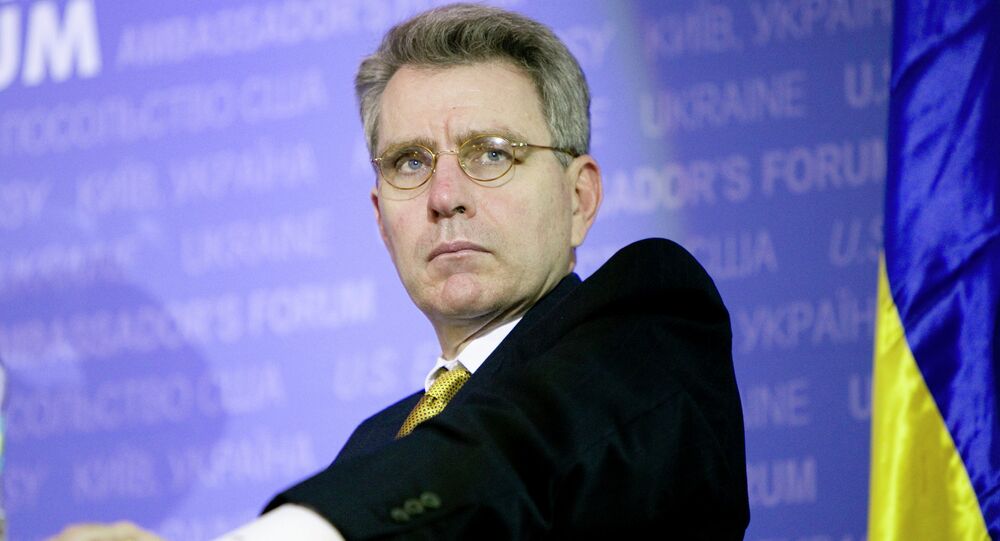 According to US Ambassador to Ukraine, who recently made a visit to the region where a deadly gun battle between Ukrainian police and Right Sector took place, the group is actually "exaggerated" by Russian media.

US Ambassador to Ukraine Geoffrey Pyatt claimed that the actions of the Right Sector political and paramilitary group are exaggerated by Russian media and its actions do not resonate as much in Ukraine.

Despite this opinion, Pyatt recently made a visit to the region and the town where the gun battle between Right Sector and Ukrainian police killed three and wounded 13, including civilians. At a press statement for the "exaggerated" actions, Pyatt apparently felt the need to say "that the use of force and weapons must be reserved exclusively to the Ukrainian government and Ukrainian government institutions."

"It seems to me that the Right Sector phenomenon is generally very exaggerated by Russian propaganda media," Pyatt said, as cited by RIA Novosti's correspondent in Kiev.

Gov. Moskal briefed me re Pravy Sector.US strongly supports position of @poroshenko,@AvakovArsen that use of force must be reserved to gvnt.

© Sputnik / Stringer
Right Sector Gives No Rest to Ukrainian Government – German Newspaper
As for Russian media, the recent conflict between Right Sector and the Ukrainian government has been portrayed from a variety of perspectives, from the prediction that there will be no armed conflict, to the idea that it could mean the group's readiness for yet another coup, to the perspective that the conflict is a reflection of an internal crisis in the group.

US intelligence think tank Stratfor said in a report on Friday that the group has been able to become both a military and more than that, a political threat, to Ukraine's government.