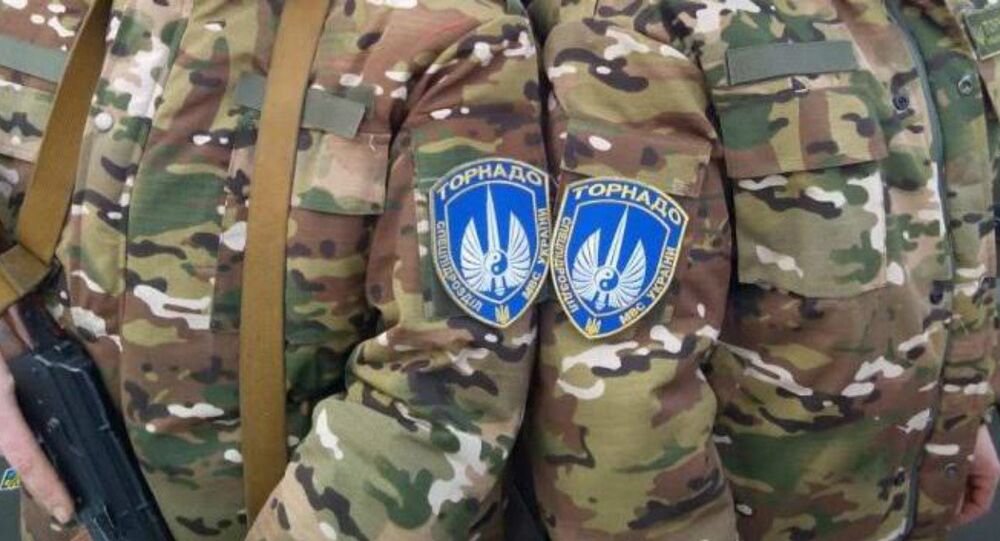 Ukraine's Chief Military Prosecutor Anatoly Matios stated Monday that fighters from the Tornado territorial defense battalion have resisted Internal Affairs Ministry orders to lay down their arms, and are presently located in a town just outside Kiev, Ukrainian media have reported.

Matios told Ukraine's Channel 5 television station that the fighters are holed up in Boyarka, a town southwest of the city.

"I don't know what the Tornado company is doing, armed, in Boyarka. Right near Kiev there are many armed men who have not disbanded [from their formations]. Where is the Internal Affairs Minister? Why can't he monitor the implementation his own order?!"

© AP Photo / Evgeny Maloletka
Acting Commander of Ukraine's Disbanded Tornado Battalion Unit Resigns
Matios had earlier complained that 43 of 109 of the company's fighters were recidivist criminals, asking how it was that such men could have come "into positions of leadership and received weapons from the state and the status of police officers, while continuing to commit crimes on the territories they were tasked with patrolling."

Ukrainian Internal Affairs Minister Arsen Avakov had signed an order disbanding the police unit back in June. The militants had initially resisted, responding to the order by mining the territory around their Severodonetsk base, blocking off the path to the base and threatening to open fire on government forces. The militants later abandoned the territory, and Ukrainian security organs have carried out an investigation.

The Tornado special police unit has been accused of committing horrific crimes during its service in Donbass, including murder, rape, assault, kidnapping, looting and racketeering. The group recorded much of their gruesome behavior, including the gang rape of a local man, on video.