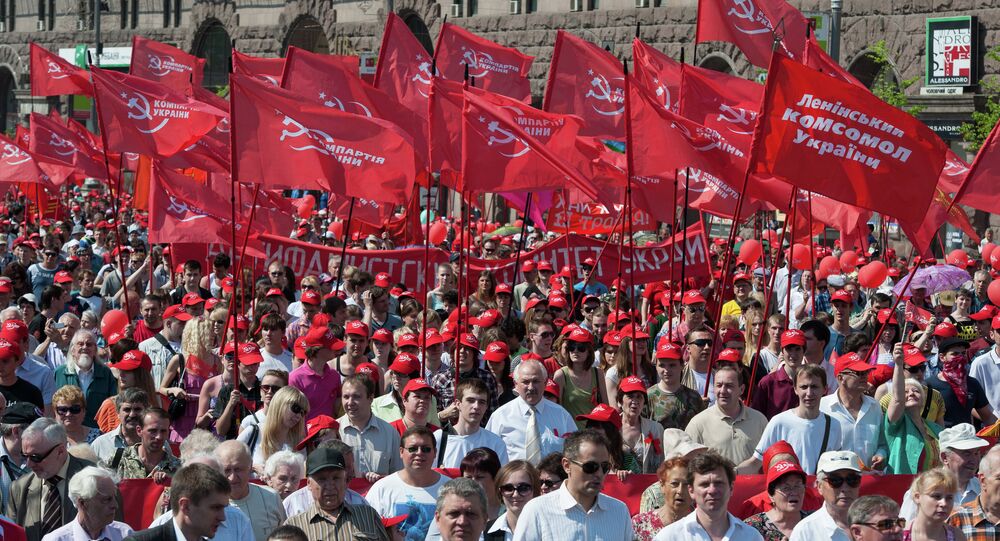 Commenting on the Justice Ministry's decision, Ransdorf, European Member of Parliament for the Communist Party of Bohemia and Moravia, told Sputnik that "the prohibition of political parties is something which has no place in the European Union…But Kiev goes its own way which, in my opinion, is far removed from the principles of democracy."

The politician noted that it was ridiculous for Ukrainian authorities to think that they could "solve its political and economic problems" via this petty decision, adding that the country has much bigger problems to tackle at the moment. "As Prime Minister Yatsenyuk has acknowledged, the country is no longer able to service its public debt, and the massacre at Mukachevo showed the political unity of the Ukrainian nation is bursting at the seams."

© Sputnik / Alexandr Maksimenko
Ukrainian Radicals Seize Communist Party Office in Odessa
Asked by Sputnik what it was that Kiev was so afraid of, and whether the Communist Party's popularity in the east of the country and among the Russian speaking population has anything to do with authorities clampdown, Ransdorf noted that at the 2012 parliamentary elections, "the Communists won 13 percent of the vote, which is not insignificant. Ukrainian authorities under Poroshenko and Yatsenyuk have sought the complete isolation of the Communist Party from the political process. Last year, I regularly traveled to Ukraine, and I know first-hand about the unbearable conditions created for the party to carry out its political activity."

Ransdorf  told Sputnik that an interaction he had with the post-Maidan crop of Ukrainian politicians have led him to believe that Ukraine's current political class does not respect the central tenet of democratic politics, which is tolerance for other viewpoints.

"I had the opportunity to hold hearings on Ukraine in the European Parliament. Three members of the Verkhovna Rada had been invited to the hearings –from the Fatherland Union, the Petro Poroshenko Bloc and the nationalist Svoboda party. As it happened, the representative from Svoboda threatened me on the floor of parliament, saying that he would deprive me of the right to enter his country. And then he quite literally attacked Dmitri Perlin, program director of the Ukrainian Commission on Human Rights and coordinator of the UA Monitoring project, who had spoken about Kiev's blockade of Donbass. All this confirmed to me the obvious fact that the political elite in Ukraine does not recognize the principle of mutual respect and understanding."

© REUTERS / Valentyn Ogirenko
The Big Lie Behind Ukraine's Communism-Free Future
Asked what the future holds for Ukraine over Kiev's decision to de facto ban the Ukrainian communists from participating in politics, Ransdorf noted that events will "inevitably lead to Kiev's total political and economic collapse."

Authorities in post-Maidan Ukraine have repeatedly attempted to ban the activities of Ukraine's communists, leading a bitter and oddly fanatical struggle against parties and their members. The Communist Party of Ukraine, which has consistently spoken out against the government since its unconstitutional toppling of the government of Viktor Yanukovych in February 2014, have been subject to various forms of official and unofficial harassment and persecution ever since. Last summer, the KPU faction in the Rada was forcibly dissolved by presidential decree, three months ahead of October's snap parliamentary elections. Communists working in the civil service were subjected to Kiev's lustration campaign. Meanwhile, ordinary party members have faced regular attacks by ultranationalist gangs, which carried out house-to-house attacks on party offices and members' homes after obtaining party lists. In May, a new law went into effect enforcing a ban on communist symbols and propaganda, and equating the ideology with Nazism.