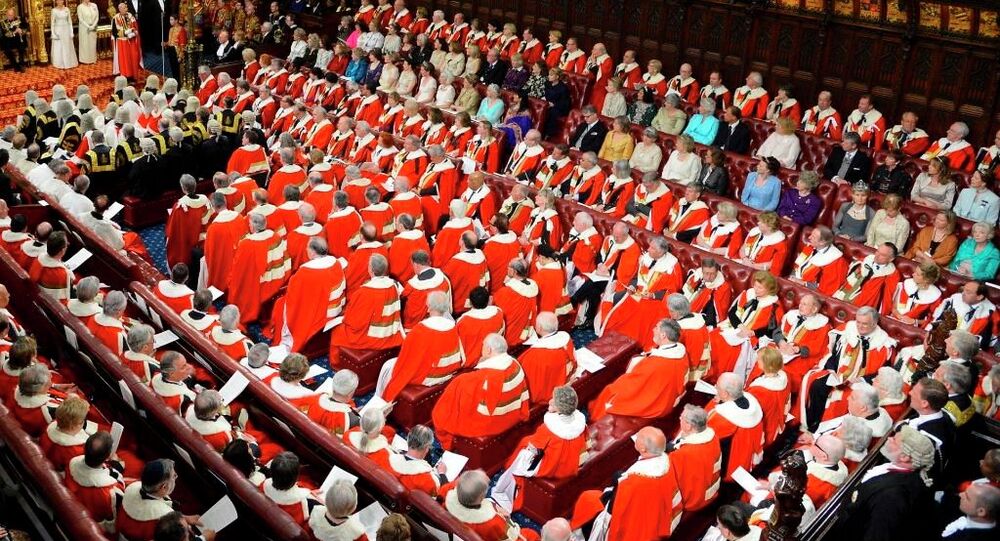 House of Sex and Drugs: British Peer Investigated Over Alleged Cocaine Use

The British peer Lord Sewel has become the latest member of the British House of Lords to be investigated by the police - this time over allegations of cocaine snorting, rather than fiddling expenses and lying in a court of law.

During a video released by The Sun newspaper, the peer —  who is 69 — is seen allegedly drinking with prostitutes, talking about his salary and making remarks about UK Prime Minister David Cameron and London Mayor Boris Johnson. He said that Cameron is "the most facile, superficial prime minister there's ever been" — and he said Johnson is "a joke" and a "public school upper-class twit."

Lord Sewel resigns post as House of Lords deputy speaker, but wants to hang on to his seat. http://t.co/bxct4jP6w2 pic.twitter.com/e5AKuzNLeh

He goes on to describe former Scottish First Minister and Scottish MP Alex Salmond as a "silly, pompous prat." He also said the current race to be leader of the Labour Party "is in a f*****g mess."

If I was George Osborne I imagine I'd have mixed feelings about being the only MP to be endorsed by Lord Sewel… pic.twitter.com/pLlBsGLgAj

The Speaker of the Lords, Lady D'Souza, has on Monday referred the matter to the Metropolitan Police and described Lord Sewel's alleged behavior as "shocking and unacceptable." According to the code of conduct for the House of Lords, any investigation by the police should lead to a member being suspended. D'Souza said:

"Lord Sewel has resigned as chairman of committees. The House of Lords will continue to uphold standards in public life and will not tolerate departure from these standards. These serious allegations will be referred to the House of Lords commissioner for standards and the Metropolitan police for investigation as a matter of urgency."

Sewel was created Baron Sewel, of Gilcomstoun in 1996 and went on to serve as Parliamentary Under-Secretary of State at the Scottish Office from 1997 to 1999, serving as the Minister for Agriculture, Environment and Fisheries. He is a member of the NATO Parliamentary Assembly.

The most shocking thing about the Lord Sewel story is that NOBODY is talking about his ridiculous middle name. pic.twitter.com/3ePo12Eaxy

Sewel is not the first peer to have his collar felt by the mighty Met Police. In 2000, Lord Archer — the author Jeffrey Archer — was found guilty of perjury and perverting the course of justice in a 1987 libel trial, during which he sued a newspaper for alleging he paid money for sex. He was sentenced to four years' imprisonment.

Share #Coke with Lord #Sewel… your taxes paid for it! #OLSX pic.twitter.com/coc3n9tBwG

Archer had sued the Daily Star in July 1987, saying the payment to Monica Coghlan was the action of a philanthropist rather than that of a guilty man. Archer won the case and was awarded £500,000 damages. The journalist at the trial later found out that Archer had perjured himself (lying under oath).

In 2010, Lord Hanningfield was charged with false accounting after it was discovered he was claiming for overnight stays in London when he had in fact returned to his home in Essex, north east of the capital. On one occasion, when he claimed for an overnight stay in London when he was actually on a plane to India. Hanningfield was sentenced to nine months imprisonment.

Probably a niche view, but I couldn't care less what coloured bra Lord Sewel likes to wear. I'm bored of the new puritanism.

However, in 2012 he was ordered to repay a further $57,411 (£37,000) covering a six-year period of expenses, under the Proceeds of Crime Act. Hanningfield was temporarily suspended from the House of Lords until May 2015.

Meanwhile, ex-Conservative peer Lord Taylor of Warwick was jailed for 12 months for falsely claiming $17,498 (£11,277) in parliamentary expenses. Jailing him, the judge said the expenses scandal had "left an indelible stain on Parliament."

On a Wink and a Prayer: UK Politicians Ready to Sell Contacts and Influence