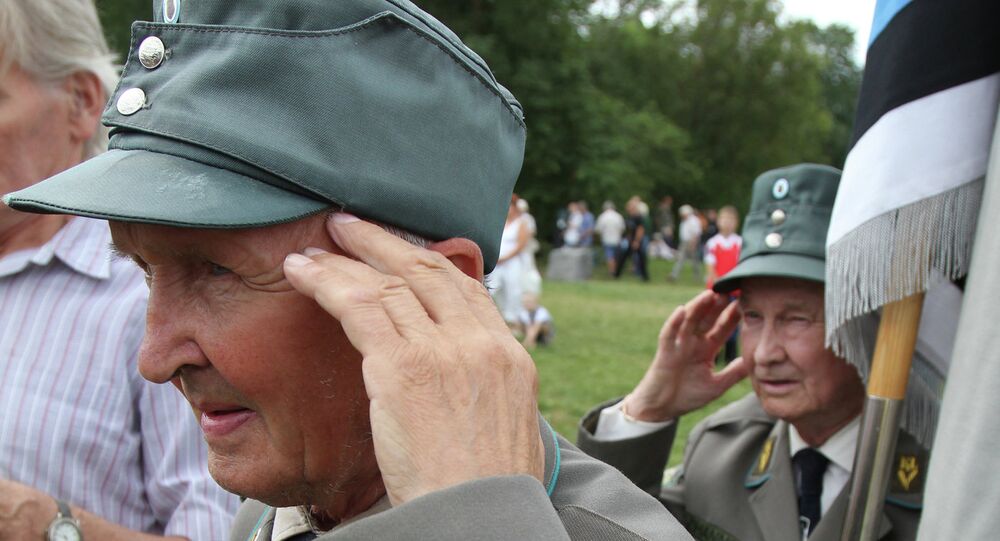 Veterans of the Estonian 20th Waffen SS Grenadier Division attended their annual get-together in the village of Sinimäe, northeast Estonia on Saturday, where they commemorated the 71st anniversary of a 1944 battle against the advancing Red Army.

© Sputnik / Alexei Olis'ko
Nazi Collaborators' Atrocious WWII War Crimes Revealed – Estonian Historian
The event, held annually on the last Saturday of July, was attended by surviving veterans, whom Estonian authorities have deemed "fighters for Estonia's freedom," along with several high profile politicians and the veterans' ultra-nationalist supporters, both from Estonia and abroad. The meeting, which was officially registered with local authorities, featured a commemorative wreath-laying ceremony conducted before a giant iron cross dedicated to the fallen legionnaires, as well as speeches and a soldier's lunch.

Covering this year's gathering at the foot of the Sinimäed Hills, Estonian news hub Delfi.ee noted that this year's event, which was attended by a few hundred people, was smaller than the one held last year, when the veterans commemorated the 70th anniversary of a months-long battle in northeast Estonia against advancing Soviet forces during the Second World War. The battle, which saw the participation of the newly formed 20th Waffen SS Grenadier Division, resulted in nearly 200,000 casualties on both sides. Over 17,000 Red Army soldiers are buried in cemetery of the village of Sinimäe. The 20th Waffen SS Grenadier Division had been formed between early-mid 1944 following a general draft, with 38,000 men conscripted to serve in the unit.

According to Delfi, the meeting featured "patriotic anti-Russian speeches," with Conservative People's Party of Estonia MP Jaak Madison speaking "on the need to protect Estonia from the Russian military threat." Incidentally Madison, whose political career appeared to take a hit earlier this year following the discovery of a blog post where he praised Nazi ideology and stated that it "consists of many positive nuances necessary for preserving the nation-state," also serves as the Deputy Chairman of the Parliamentary Committee for EU Affairs. Former Minister of Foreign Affairs Trivimi Velliste was also in attendance, welcoming the event's participants.

A new addition to this year's meeting was the attendance of a small group of Russian ultranationalists, who came to lay a wreath at the legionnaires' memorial; the wreath featured the words 'Glory to Heroes' inscribed on its ribbons.

For its part, the Russian Foreign Ministry denounced the commemorative events taking place at Sinimäe, saying they are an open attempt to glorify the Nazis and their accomplices, and voicing its regret that such events can continue to take place in state which is part of the European Union.

© Photo : waralbum
Estonian Red Army Veteran: Russians Never Doubted They Would Win
Speaking to Delfi, Vayvaraskaya township representative Veikko Luhalayd explained that authorities are "trying to be tolerant, from the historical viewpoint, toward all the memorials" in the area, which include everything from SS memorials to those to Soviet soldiers and concentration camp victims. "Everything that happened in our history happened, and there's nothing we can do about it. We live in a long-troubled land where we suffered and they suffered…Every time I speak on this issue I note that a war on memorials makes no sense, but there is a need to respect human feelings."

During the Second World War, over 80,000 Estonians volunteered or were drafted into the ranks of Hitler's armies, with another 3,000 volunteering to serve in the Finnish army. Over 27,000 Estonians served in the Red Army's 8th Estonian Rifle Unit, with thousands more serving in other units. An estimated 21,200 Estonians gave up their lives fighting for the Red Army.