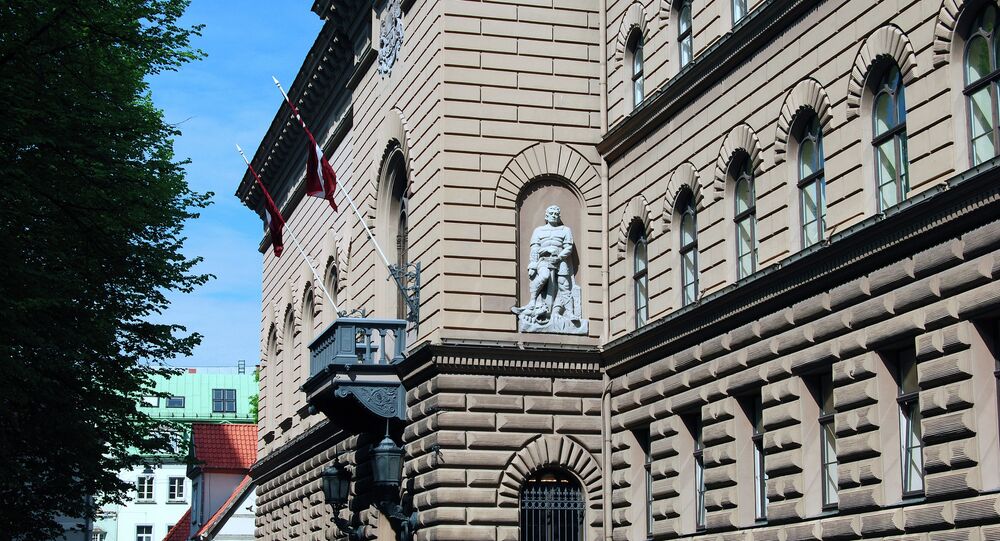 Last week, Latvia's parliament passed a series of amendments to the country's Education Law, demanding that teachers and school administrators show "loyalty to the state and the constitution." Since then, teachers have been mulling what exactly such demands will entail, while Latvian officials have done their best to offer clumsy explanations.

© Sputnik / Oksana Dzhadan
Latvian President Rejects Language Commission's Call to Stop Speaking Russian
The amendments to the Education Law, proposed on the initiative of liberal-conservative 'Unity' MP and Parliamentary Commission on Education Chairman Ints Dālderis, were approved in their final reading by the Saeima last week, and will take affect at the start of the new school year this September.

Asked by Latvian Russian-language newspaper Vesti Segodnya what exactly 'loyalty to the state' will mean in the context of the amended law, Education Minister Mārīte Seile explained that "loyalty is a respectful attitude toward the state, and any form of honest work which benefits the state. Loyalty toward the Latvian state means conduct and behavior which support Latvian national independence, its territorial integrity, its status as a democratic state and the Latvian language as the only official state language, as well as other regulations in accordance with the Constitution of the Republic of Latvia."

Seile emphasized that while the current initiative did not originate in her ministry, "even at present, in the hiring process for a teacher, checks are made to meet the requirements of existing legislation, including certain restrictions, since this is a profession where only people with an impeccable reputation can be allowed to work. The resolution of any conflict situations takes place under the auspices of the State Service of Education Quality (GSKO)."

© Flickr / Stefan Leijon
Latvian Beachgoer Attacks Child, Saying 'Russians Don't Belong Here'
For her part, GSKO Head Inita Juhņēviča told Vesti Segodnya that in fact, the idea of loyalty checks for teachers is nothing out of the ordinary. "This will not be any special form of testing. We have already considered these issues, when we faced complaints from parents, students or other teachers."

Juhņēviča noted that "as for the degree of loyalty, we estimate it in accordance with the regulatory documents which have been established, including the Constitution, the Education Law and the Standards of Primary and Secondary Education. Even before this initiative, the Education Law had an article according to which the teacher must imbue students with patriotic feelings toward the state. And when considering the loyalty of individual teachers, we still use this article."

The bureaucrat emphasized that "if the teacher is disloyal, how can he or she cultivate loyalty or patriotism in his or her students? Ultimately, it is the school director who is responsible for the loyalty of his teachers. And the school director's loyalty is ensured by the local government –that is, his or her employer. Of course, evaluating his or her teacher, the school director observes how the teachers work every day, watches their activities, hears what they say. But we do not have any plans for any extensive checks, apart from specific complaints, and of course, this applies to all schools; there is no difference whether the school is Russian, Latvian, Polish or Jewish."

© AFP 2020 / SAUL LOEB
Minority Report: Latvian President Admits Failures in Integrating Russians
Voicing his complete and utter disagreement to the explanation given by officials, Parents to Children Foundation President and Riga-based 'Eureka' private school founder Jacob Pliner told Vesti Segodnya that the law is simply a disgrace. "I believe that some laws in Latvia, such as the Citizenship Law, the Language Law, and the Education Law are discriminatory." In Pliner's view, "the introduction into the Education Law of who can and cannot be a teacher is but another disgrace for Latvia."

Noting that loyalty to the state is an ambiguous concept in and of itself, Pliner recalled that while the Latvian public education system is plagued by problems of low qualifications and low pay, the amendments will only exacerbate teachers' fears of the Ministry of Education. "Instead of helping, guiding, training and supporting teachers [the ministry works] only to check up on and scare them." In the educator's view, teachers of minority schools, already fearful of the country's Language Law, will be doubly terrified. "I think the new rules have been introduced in order to strike even more fear into teachers' hearts."

Latvian psychologist Inna Guseva offered her view, warning that "constant restrictions and attempts at control by authorities, including the suppression of teachers' thoughts and needs, the fear of losing their jobs due to an inadvertently spoken word –all of this will lead if not to depression, than to a complete loss of motivation and to a creative approach toward teachers' work. We will get zombified robots who dutifully execute commands from above. Consequently, we will get the same from a whole generation of children. After all, a free-thinking person can only be educated by a free-thinking person, and that is exactly what our country needs today."

Allowing itself to editorialize, Vesti Segodnya noted that the amendment gives every indication that "there will be no shortage of conflict situations. Maybe a teacher uses Russian textbooks in his classroom, or 'likes' the wrong post on a social network, or maybe a school hangs out the wrong banners on its façade, or takes children on a field trip to the [wrong] monument. In general, while Western countries are busy chasing teachers who are sexually exploiting their students, our authorities are looking to monitor the 'politically amoral.' And now, with the passage of the amendments, perhaps it may be necessary to recheck everyone.  On Monday, someone may come to a school from the State Language Commission, and on Tuesday, a man will come from the GSKO; after all, teachers must not only speak fluently in the national language, they must also think the way the state tells them."