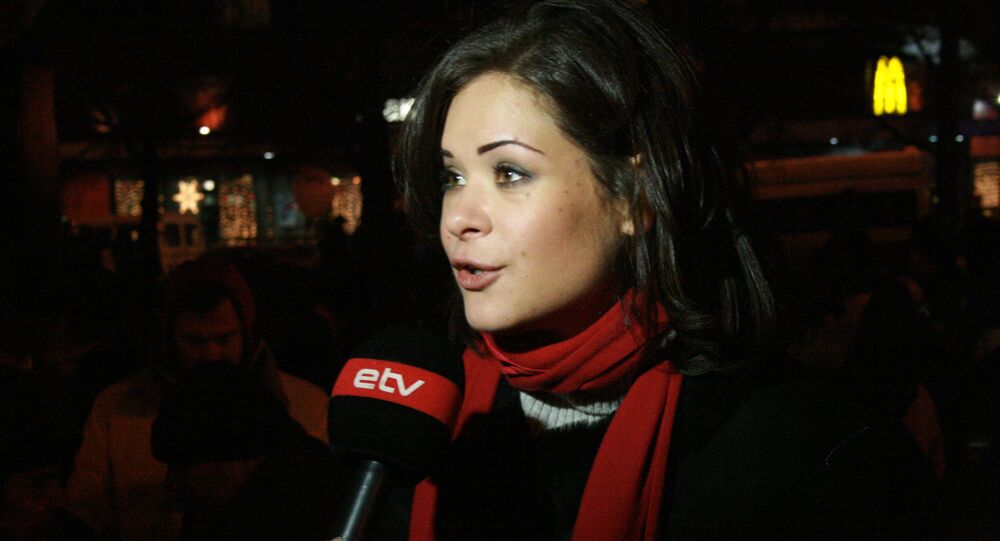 Ukrainian media and political figures gave the Russian liberal political figure a cool reception upon her appointment as Saakashvili's deputy after she was unable to answer a journalist's question about who Ukraine is at war with.

The new deputy governor of Ukraine's Odessa region, the Russian liberal political figure Maria Gaidar got a cool reception upon her appointment after she refused to comply with the standard Ukrainian political narrative that Ukraine is at war with Russia.

© AFP 2021 / IRAKLI GEDENIDZE
Saakashvili's Governorship in Ukraine Slap to Georgians - Politician
Maria Gaidar was appointed to be the deputy of former Georgian president and current Odessa region governor Mikheil Saakashvili on Friday. Gaidar previously worked in Moscow at a non-profit which dealt with the city's social services and took part in liberal opposition movements alongside her business activities. She is the daughter of the late former Russian Prime Minister Yegor Gaidar, who is considered one of the architects of the controversial economic policies that came to characterize Russia's radical "shock therapy" transition to capitalism during the early 1990s.

Ukrainian parliament member and former deputy governor of Dnepropetrovsk Borys Filatov, famous for his "we will hang them later" line regarding Crimeans seeking independence from Ukraine, responded harshly to Gaidar's stance.

"They simply don't give a **** about our country. They are making money here. Or are fulfilling their sick ambitions. Or are training themselves 'on cats.' Choose the option for their motivation yourself," Filatov posted on Facebook.

Gaidar refused to answer when a Ukrainian television journalist asked her three times, "Who is Ukraine at war with?" The question is a sort of litmus test in Ukrainian politics, where media coverage and political discourse appears to hinge on the idea that Ukraine is at war with Russia, rather than fighting an internal civil war. Ukraine's parliament is currently considering a law which would issue prison terms of up to ten years for "denying Russian aggression." After passing six committee hearings, it is awaiting a floor vote.

© Photo : http://1-news.net/ua/
'Saakashvili Go Home!' Odessa Activists Demand Governor's Dismissal
Poroshenko Bloc leader Yuriy Lutsenko was more careful in his statement, saying that Gaidar would simply be a spokeswoman for Saakashvili. As a deputy to the governor of Odessa region, Gaidar occupies an executive, rather than a representative position.

"She will be the spokeswoman for Saakashvili's team for those who wish to 'hear' in Russian. Such is his logic," Lutsenko told Ukrainian television.

Gaidar later wrote on her Facebook that she has always been a supporter of Ukraine's territorial integrity, against Crimea's "annexation", and against the war in eastern Ukraine.

© Photo : BBC screenshot
Odessa Activists Launch Giant Saakashvili Balloon, Complete With Famous Necktie
"To clarify the resulting collision, Gaidar must: 1. immediately provide society all examples of her 'repeated voicing' of the position 'for Ukraine's territorial integrity, against the annexation of Crimea' which took place before June 2015, before her coming to Odessa to meet Saakashvili. 2. Refute her word on Crimea and agreement with Navalny," Illarionov wrote in his blog, adding that otherwise her statement must be considered a lie.

Members of Russia's liberal political establishment were also critical of Gaidar, with Kirov region governor Nikita Belykh, who Gaidar also worked under as a deputy governor, saying that he does not support her decision.

"Going to work for the people whose relationship to our country and our people is known and is sharply negative is perceived as a contraposition of yourself to not only the government, but to all Russians," Belykh wrote.

In her statement to Ukrainian television, Gaidar also said that Ukrainians and Russians are brotherly people, which received the ire of some Ukrainian social media users, but not politicians.