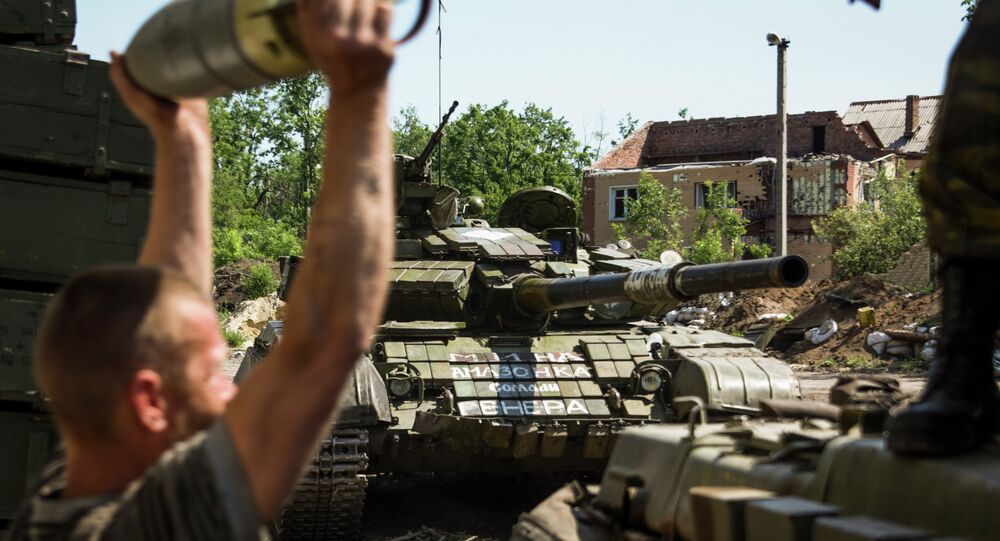 Withdrawing weapons with a caliber of less than 100mm and armored vehicles from outskirts of Donetsk by army of the self-proclaimed Donetsk People's Republic is monitored by he OSCE Special Monitoring Mission to Ukraine.

DONETSK (Sputnik) — Army of the self-proclaimed Donetsk People's Republic in eastern Ukraine is withdrawing weapons with a caliber of less than 100mm and armored vehicles from the outskirts of Donetsk, a RIA Novosti correspondent reported on Sunday.

On Saturday, both Lugansk and Donetsk People's Republics (LPR and DPR) stated they decided to unilaterally withdraw heavy weapons to a distance of at least 1.9 miles from the line of contact with government troops.

© AFP 2020 / ANATOLII STEPANOV
Donetsk Asks OSCE to Monitor Withdrawal of Smaller Weapons in Conflict Zone
Tanks have been withdrawn some 1.9 miles from their previous position in the outskirts of Donetsk.

The process is being monitored by the OSCE Special Monitoring Mission to Ukraine. Representatives of the Joint Center for Control and Coordination, established by Ukraine, Russia and the OSCE and the DPR's Ministry of Defense are also present.

Earlier in the day, LPR's army also began the withdrawal of the weaponry from the contact line in eastern Ukraine.

Under the February ceasefire deal reached in Minsk, both Kiev authorities and Donbass independence militias were to remove heavy weapons with a caliber of over 100mm, creating an 18-mile buffer zone.

DPR, LPR to Ask UN for Tribunal on Humanitarian Law Breaches in Ukraine