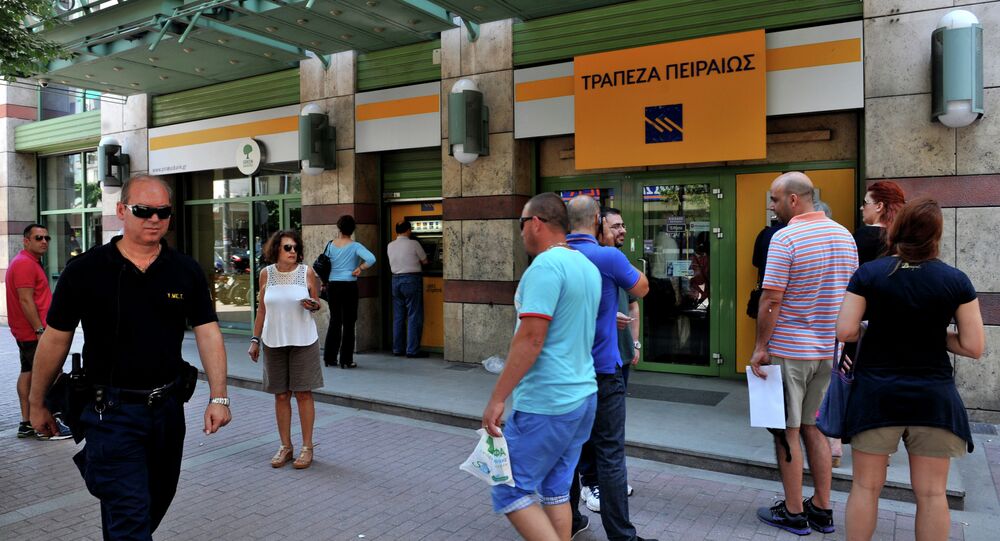 Greek Banks to Reopen After 3-Week ‘Holiday’ on July 20

Greek banks will reopen on July 20 after the government's decision to close banks, according to the country’s Ministry of Finance.

© REUTERS / Yannis Behrakis
Greek ‘Bank Holiday’ Results in $3.25Bln Loss
ATHENS (Sputnik) — Greek banks will reopen on July 20 after being shut for three weeks, although limitations on cash withdrawal will remain, the country’s Ministry of Finance said in a statement on Saturday.

The Greek government shuttered the country's banks on June 29, restricting daily ATM cash withdrawals to 60 euros ($65) per person. The bank closure has been extended four times.

"Monday, July 20, is the deadline for the legislative action that introduced bank holiday. On Monday, all bank branches will open, a number of banking transactions, permitted under the control of the movement of capital, will be expanded," the statement said.

The 60-euro restriction on cash withdrawals will remain. If funds are not withdrawn for several days, a client will be able to receive an accumulated sum of money during the period, which cannot exceed 420 euros per week.

Three weeks of “bank holiday” in Greece have resulted in the loss of some 3 billion euros ($3.25 billion), local media reported on Saturday.

The decision to implement capital controls was made amid panic following the announcement of a July 5 national referendum on bailout terms, which was feared could trigger an exit from the eurozone.

On Wednesday, Greek media reported that the European Central Bank was ready to increase the amount of money Greek banks could borrow under the Emergency Liquidity Assistance program, allowing financial institutions to reopen.