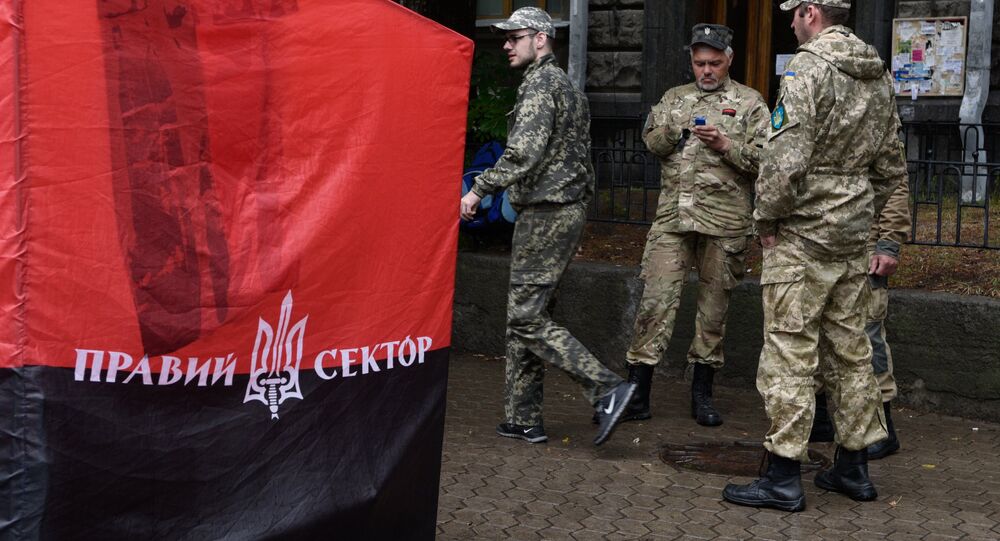 The Ukrainian radical organization Right Sector has reportedly claimed that it cannot communicate with its members who are hiding from law enforcement officers in Mukachevo due to technical problems.

© AFP 2021 / PETRO ZADOROZHNYY
Azov Volunteer Battalion Vows to 'Help' Resolve Mukachevo Standoff
Technical glitches have prevented Ukraine's ultra-nationalist group Right Sector from keeping in touch with its members in Mukachevo, where a special operation is under way to track and detain them, according to the Ukrainian TV channel 112.ua.

"It is a technical problem, because we cannot contact the guys [due to the failed mobile communication]. No mobile phone can work without recharging for such a long period of time," Sachko said.

According to 112.ua, a special operation is continuing on the outskirts of Mukachevo, and Ukrainian's military are on duty at checkpoints.

Correspondents have reported a new roadblock, where they said servicemen were checking cars and the documents of those who passed through this checkpoint.

July 11 saw the exchange of fire in Mukachevo between local police and Right Sector members, who used sub-machine guns and grenade launchers. At least three people were reportedly killed and thirteen more were injured in the clashes.

© AFP 2021 / SERGEI SUPINSKY
State Department: US Not Providing Training to Right Sector
The Right Sector members, who took refuge in the local woods, insist that they will only lay down arms after the relevant order is given by Right Sector leader Dmitry Yarosh. Four of them have already been arrested, while six others remain at large.

The Right Sector is a Ukrainian association of radical, ultra-nationalist organizations that took an active part in the anti-government protests that led to the ousting of former President Viktor Yanukovych in February 2014. In January 2015, the Russian Ministry of Justice added the Right Sector to its list of non-commercial organizations whose activity in Russia is prohibited.