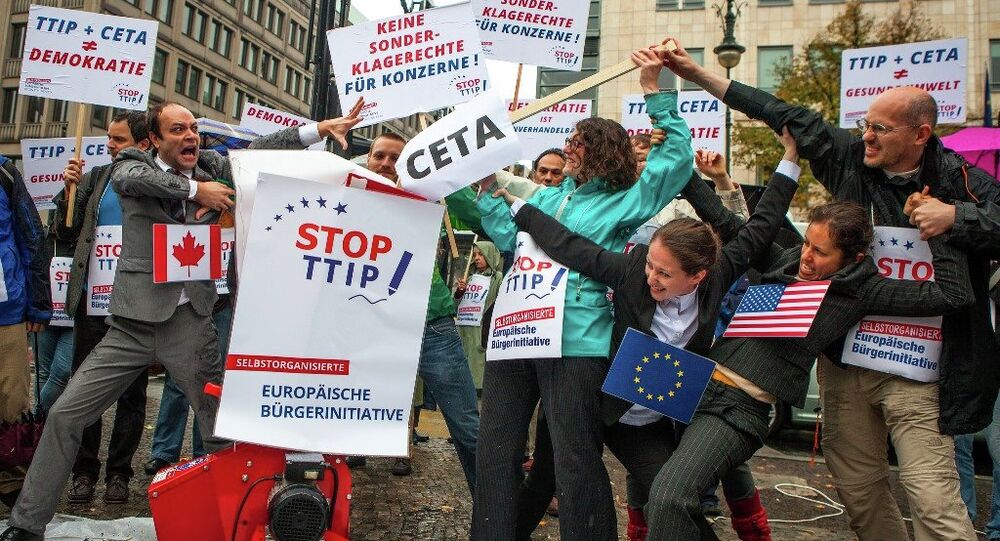 A leading UK lawyer has said the negotiations for the Transatlantic Trade and Investment Partnership (TTIP) which have been shrouded in secrecy have resulted in a totally unclear arbitration scheme.

MEPs last week voted through an amended version of the controversial Investor-state dispute settlement (ISDS), after months of argument. Essentially, as part of the biggest joint trade deal in the world — between the European Union and the US — critics say the ability for governments to regulate industries on matters of food safety, health and the environment are at risk.

There are huge differences in the way children's food, textiles for clothing, drugs and many other consumer items are regulated in the EU and the US. Many consumer organizations fear that the TTIP deal — which is being heavily lobbied by giant multinationals — will lead to a harmonization and weakening of regulations on what big companies can sell.

One of the main sticking points is the ISDS, under which a US company that was disallowed from selling an item in Europe that it would be allowed to sell in the US, under TTIP, could sue the government or EU body imposing that regulation for loss of profits.

"The ground for action would be governmental 'expropriation' of investments — and that may mean anything from telling a cigarette manufacturer that he must have to change what his packets look like, (with consequential loss of profits), to imposing new environmental standards on a power generating plant."

Members of the European Parliament have struggled for months to get around this part of the TTIP in an attempt to retain regulatory control over what is sold in Europe, but came up with a compromise last week, which remains totally void of legal detail. David Hart wrote:

"On 8 July 2015, the European Parliament resolved to approve TTIP, but only after a suggested amendment to the ISDS proposals. The amendment proposes that the current system is replaced with a new system 'subject to democratic principles and scrutiny' (whatever that means). The EP's text looks to be no more than ISDS-lite, with many of the intrinsic defects of the original, and some meaningless qualifiers which will be negotiated away once those nice US negotiators promise sweeties."

One example of the ISDS nightmare currently playing out in Europe is the case of energy company Vattenfall, which is suing the German Government for billions over its decision to speed up nuclear shutdown following the Fukushima disaster.

"The tribunal has made four rulings about confidentiality — at whose request, we don't know, and we do not know what the parties said."

"Copies of case papers are kept in a high-security building of the German Parliament and may not be made available to the public under any circumstances. German Parliamentarians have been given a one-page summary of the case," Hart says.

He says the continuing Vattenfall case — being held in such secrecy — is worrying, as nuclear is a huge issue in Germany and the state's ability to control its energy resources and protect its people is a matter of public interest.

The future of an ISDS-lite in Europe remains unclear. But if TTIP goes ahead unchallenged, it will lead the way to big business suing governments for doing what they are democratically elected to do — protect the citizens.