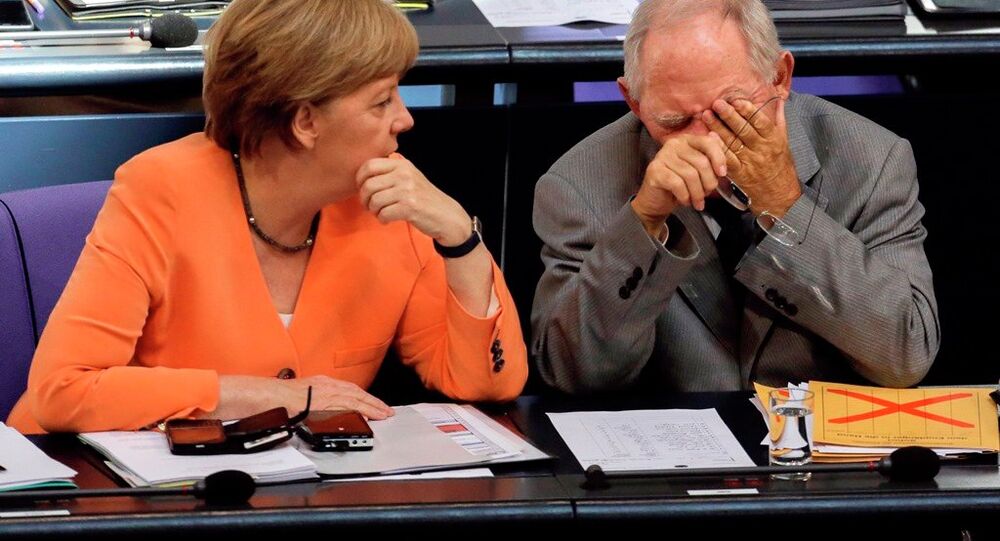 The hugely stringent and socially damaging bailout conditions that the Greek Parliament voted through early Thursday has exposed the fact that – in many of the conditions – it is being asked to do what Germany does not.

© Flickr / Images Money
Greek Bailout Embroiled in Berlin Bribes Probe
Germany has been the strongest Eurozone country to push for more austerity in Greece, in return for its multi-billion dollar bailout. Many of the harsh conditions have been tabled by Berlin, keen to make the German austerity model work in the Mediterranean nation.

But in demanding that Greece sell off the family silver, Germany is conveniently forgetting is own failure to put in place the very reforms that it is demanding of its Eurozone partner.

One of the main reforms of the Greek retail sector required by the latest bailout conditions is the adoption of "more ambitious product market reforms with a clear timetable for implementation of all OECD toolkit I recommendations [i.e. the recommendations that the OECD has now renounced after having re-designed these reforms in collaboration with the Syriza government], including Sunday trade…"

In short, this means the Greeks — who have long clung on to the belief that Sunday is a rest day — will have to reform their shopping hours to allow seven-day-week shopping. A law passed in 2014 allowed a limited number of shops to open in certain tourist areas, but was met with stiff resistance from shop workers and owners alike.

In Germany, however, Sunday shopping is verboten under the Ladenschlussgesetz or Shop Closing Law which restricts retail trade to airports, railway stations, airports and a small number of other exceptions.

Another reform being thrust on Greece is the privatization of many of its state assets — including ports and infrastructure, including transport.

Yet, in its mad dash for cash, Germany has conveniently forgotten it is one of the biggest owners of state assets in Europe. The German state wholly owns Deutsche Bahn, the railway operator which owns Arriva and DB Schenker that operate in privatized form in 12 other EU countries.

The German state or its regional Lander, owns a significant chunk of the banking sector: KfW Bank, the Landesbank and the Sparkassen system. It has part ownership of Hapag Lloyd, one of the largest container shipping lines in the world — which will annoy the Greeks who will have to sell off many of their maritime assets.

And Germany owns significant stakes in Airbus/EADS, Volkswagen, T-Mobile and Deutsche Post. In fact, the KPMG-sponsored Privatization Barometer shows Germany at the bottom of the list in terms of privatization revenues, with the UK, Portugal, Belgium and Sweden all far in the lead.

Greece has been given a tall order to raise billions by selling off its state assets and opening up its Sunday trading. Two things Germany might like to address too.